Bitcoin‘S Move To Its New All-Time High, Do you really want to know all it move before now? After the launch of the first Bitcoin-linked ETF(Exchange Traded Fund) on the New York Stock Exchange, Cryptocurrency has hit a new all-time high which is above $65,000. The currency moved to this price on Wednesday and has since fluctuated around this value. This is an overview of how it got here. 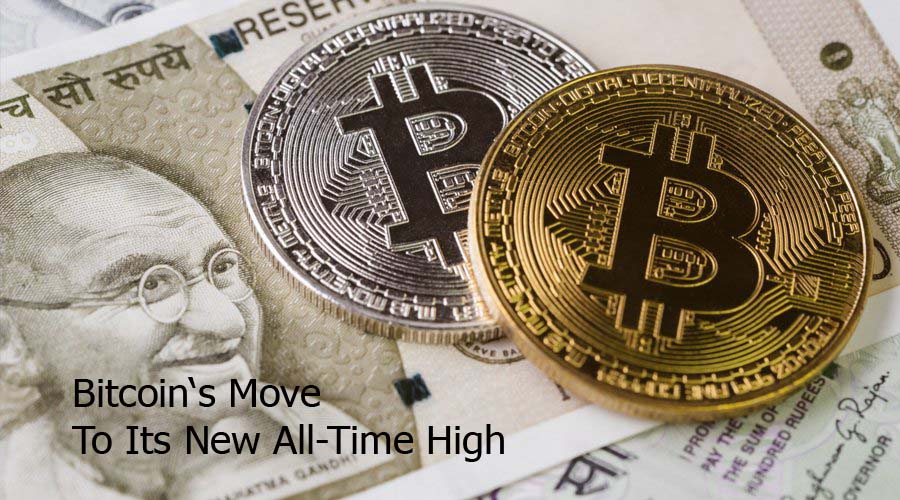 After the Bitcoin.org domain was registered on August 18th, 2008. It took a considerable amount of time before it could be used for its first transaction. The first-ever bitcoin transaction took place on the 12th of January, 2009 between Nakamoto himself and Hal Finney.

The first set of real highs and lows waited until Feb 9th, 2011 when it reached parity with the US dollar at a 1:1 ratio. Ever since then it has been very volatile hitting different highs until this very day. Four months from hitting $1 it skyrocketed to $31.91.

Some days after its price plunged down back to $10.25 in the first major correction experienced by the Bitcoin community, this was followed by a further fall in price in six months’ time, following the news that Paxum the e-wallet company had stopped accepting BTC.

After all these happenings followed the first halving of Bitcoin rewards, the block reward was reduced from 50 to 25 BTC. Then the currency experienced a substantial increase in price and by April 9th, 2012 it had passed the $200 mark.

The shutdown of Silk Road, the infamous dark website, and the seizing of over 26,000 BTC caused a great reduction in the price of BTC from $139 to $109 at the fifth anniversary of the Cryptocurrency.

By November 2013 BTC, had experienced a great increase as a single BTC was rated at over a thousand dollars which was the price for an ounce of gold. This was a short-lasting increase as the price of Bitcoin fell down to $600 and fluctuated back at that range in the next two months.

On July 9th, 2016 the second halving of Bitcoin rewards took place, with the reward of every block reducing from 25 to 12.5%.

2017 was the start of the biggest bullish movement of Bitcoin history. BTC once again hit the $1000 mark on Jan. 2nd. In the same year, an application for a BTC Exchange-Traded Fund was turned down by the US Securities and Exchange Commission despite the surge of the price of the Cryptocurrency due to the anticipation of the application’s approval. This event followed a dip for a couple of months.

On June 11, Bitcoin for the first time crossed the $3000 mark and up till September 2017 continued to surge in price as it crossed the $5000 mark. This followed high volatility for a couple of weeks and a drop in price back to $3000 before rebounding back after China banned ICOs and Cryptocurrency Exchanges from operating in the country.

The cryptocurrency increased above $10,000 in value on November 29 and then breached the $11,000 mark just a few hours later.

2018 had a rough start for BTC as January saw the price of BTC drop as low as $10,000 as a wave of FUD took over the markets. This correction is a result of a wild turn out of events including the Facebook ban of Cryptocurrency adverts from its platform, Murmurs of a Cryptocurrency ban in South Korea, and the China Cryptocurrency sanctions. By Feb 6, 2018, BTC’s price had dropped down to $7000.

In March, a ban on cryptocurrency advertising was instituted by Twitter, and by June 24, 2018, Bitcoin had hit its lowest point which is $5,868. Following this event BTC market volatility on October 17 hit a 17-month record low.

By January 2019 Bitcoin was valued at $3,717 and then barely passed the $4000 mark during the first week of January. This was a very short-lived uptrend as its price fell to a low of $3,358 on Feb. 7. This followed a relative fluctuation in the remaining part of the month.

Bitcoin opened April 2019 with an impressive $4,125 compared to its previous performance in February and then on the second half of the year it soared higher, opening above the $10,000 mark, hitting $10,442.80 on the first day of the month. BTC went further to hit its highest mark for the year which is $11,815 on August 7.

Bitcoin proceeded to another progressive drop in the next few weeks until it reached its lowest value for the third quarter of the year, $7,994.55 on the 29 of September 2019. By December 2019, its value had dropped to about $7580.

By March 13, 2020, the BTC price had dropped down to $3,800 due to the COVID 19 pandemic declaration, President Trump’s announcement of the closure of U.S borders, and all three major U.S stocks being plummeted.

2021 so far has been a very volatile and bullish year for the cryptocurrency as the price increase reached up to its highest on the 8th of January. That was its all-time highest price yet the price continues to surge upwards.

Recently in this month of October, The price of BTC has broken a new high due to the debut of the Bitcoin-linked ETF.

There is no certainty that the cryptocurrency will remain at that price as anything may happen which will affect the price of the commodity.