Do when to know Bill Gates 5 Favorite Books in 2021? Bill Gates, Microsoft’s co-founder has had a very tough year due to his divorce which was finalized in August. In May, stories from The New York Times and The Wall Street Journal alleged questionable behavior by Gates while he was still married. After the whole divorce issues, Gates’ oldest daughter, Jennifer, wedded in October. 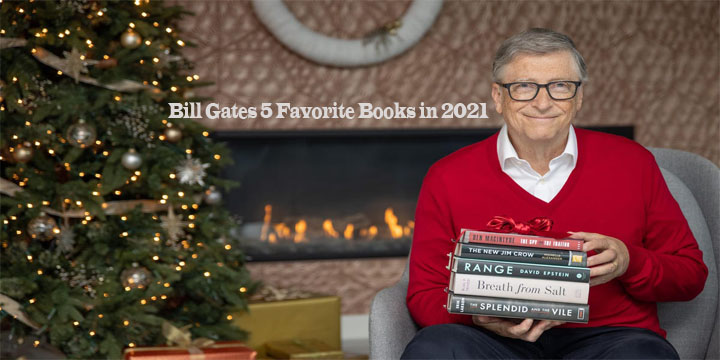 Through it all, Gates has not lost his reading culture, and on Monday he published a video and blog post recommending five books he enjoyed in 2021.

Like many of us, Gates discovered Andy Weir’s writing through his 2011 bestseller, The Martian. The new novel gives a story of a high school science teacher who wakes up in a different star system with no memory of how he got there. “It’s a fun read, and I finished the whole thing in one weekend,” Gates wrote.

Facts from Shakespeare’s life were used to create this wonderful novel by Maggie. Shakespeare’s son Hamnet died at age 11, and later the playwright famously wrote the tragedy, Hamlet. Gates calls the novel “moving,”. “I especially enjoyed reading about [Shakespeare’s] wife, Anne, who is imagined here as an almost supernatural figure, says Shakespeare.

Klara and the Sun, by Kazuo Ishiguro

The renowned author of Never Let Me Go and The Remains of the Day, among other novels, Kazuo Ishiguro has a news story about a world with super-intelligent robots. “I love a good robot story, and Ishiguro’s novel about an ‘artificial friend’ to a sick young girl is no exception,” Gates wrote.

“This book made me think about what life with super-intelligent robots might look like — and whether we’ll treat these kinds of machines as pieces of technology or as something more.” Gates’s inquisitiveness about the whole new technology makes the story an interesting one for him.

The Code Breaker: Jennifer Doudna, Gene Editing, and the Future of the Human Race, by Walter Isaacson

Walter Isaacson’s The Code Breaker talks about the discovery of the CRISPR gene editing system. Of course, Gates is already in the loop. “I’m familiar with it because of my work at the [Bill & Melinda Gates Foundation] — we’re funding a number of projects that use the technology,” he writes.

“But I still learned a lot from this comprehensive and accessible book about its discovery by Nobel Prize-winning biochemist Jennifer Doudna and her colleagues.

A Thousand Brains: A New Theory of Intelligence, by Jeff Hawkins

This is another nonfiction book for science lovers. The creator of the Palm Pilot, Jeff Hawkins wrote A Thousand Brains about the connections between neuroscience and machine learning.

“Few subjects have captured the imaginations of science fiction writers like artificial intelligence,” Gates writes. “If you’re interested in learning more about what it might take to create a true AI, this book offers a fascinating theory.

These are five wonderful books recommended by Bill Gates himself, I suggest you try them out as it promises to be a wonderful experience for the perfect mind.