So, what can we expect from the newly launched Apple watch series 7? The Apple Watch 7 launched on September 14 at the Apple event alongside the iPhone 13, bringing the first redesign to Apple’s smartwatch line. 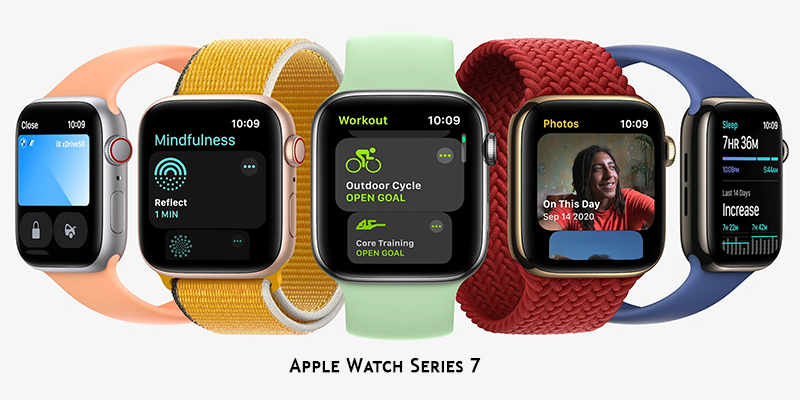 According to TechRadar, while the wearable isn’t coming until later this year (Q3 2021), we finally know what’s coming and it looks like a bunch of incremental improvements.

The Apple Watch 7 has a refined look that retains the rounded edges but with thinner bezels for 20% more screen area than the Apple Watch 6 and new sizes of 41mm and 45mm.

Technically, this is the first big redesign since the Apple Watch 2 expanded to the 40mm and 44mm sizes, but it’s not as drastic a redesign as we were expecting.

Apple Watch Series 7, What Can We Expect?

While rumors had us expecting a more radical redesign to a flat-edged look like the iPhone 13, we’re still in the round-edge territory. There also aren’t any new health tracking features as expected.  It looks like we’ll have to wait for next year’s Apple Watch 8 for the rumored blood pressure and glucometer sensors.

The Apple Watch 7 does get a 70% brighter Always-On display while indoors, IP6X dust resistance, the same WR50 water-resistance as prior models, and more durability. The battery is the same (18 hours expected) but recharges faster by 33%.

The Apple Watch 7 comes in the expected small and large sizes, though they’ve been slightly expanded to 41mm and 45mm this time around in GPS-only and 4G LTE versions, though we don’t have exact pricing aside from $399 for the 41mm GPS-only model.

The colors the Apple Watch 7 will come in are not yet known. But it’s rumored to be offered in five new aluminum finishes: midnight (black), starlight (gray), green, blue, and (PRODUCT)RED. There are three new Nike Sport Loop colors, as well as new Apple Watch Hermès bands.

While rumors suggested the Apple Watch 7 would have a flat-edged design much like the iPhone 13, Apple stuck with the round-edged look. However, with thinner 1.7mm bezels than the Apple Watch 6, the new smartwatch has 20% more screen area.

That larger screen size also comes with slight size increases in this year’s Apple Watches – up to 41mm and 45mm, though the smaller bezels mean the actual size isn’t too much bigger. There are slight improvements to the display, too, which is up to 70% brighter indoors in Always-On mode than the screen on its predecessor.

Apple didn’t have anything to announce about the Apple Watch 7’s specs, suggesting it has the same Apple S6 chipset and 1GB of RAM with 32GB storage that debuted in the Apple Watch 6.

Apple went out of its way to say the new watch has the same 18-hour battery life as its predecessor, suggesting it likely has the same 304mAh battery as in the Apple Watch 6.

But the watch does come with a more advanced charger for 33% faster charging, juicing up from 0% to 80% in 45 minutes.

The Apple Watch 7 has the same sensor suite as its predecessor, meaning those rumors about glucometers and blood pressure sensors didn’t turn out to be true.

But the smartwatch still has an impressive array of health monitoring features to track ECG, blood oxygen levels, heart rate, and plenty of other metrics. You can get more details by simply clicking here.