An owner of Tesla blows up Model S instead of footing the repair bill. What will you do if you are faced with a repair bill that costs half of what you paid for your car, what will you do? Will you pay the expensive bill or choose to take it to the junkyard or better still sell it for parts. 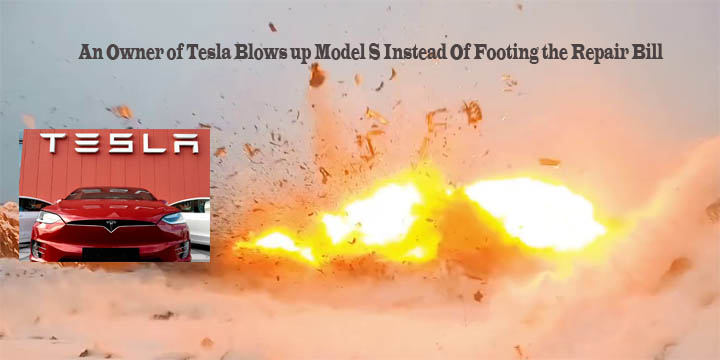 Finnish Tesla owner Tuomas Katainen decided to do something that kind of extreme but arguably more satisfying when faced with that kind situation, he watched his car go up in flames as it was reported from Gizmodo.

Katainen was said to hand his 2013 Tesla Model S over to Pommijätkät, a group of explosion experts on YouTube who loves to make things go “boom,” after he was quoted about $22,600 for just a battery replacement. “Well when I bought that Tesla, the first 1,500km [932 miles] were nice,” Katainen recounted.

“Then, error codes hit.” After Katainen brought his Tesla to a mechanic, he found out that the only way he could be able to put the car in order would be to replace the entire battery pack, which would cost him at least 20,000€, or around $22,600.

Katainen Said He Plans to Explode the Whole Car Away

The verge noted that it’s understandable that anyone would be understandably irritated at that point in time when putting the price into consideration for a new 2013 Tesla Model S that started low and became higher in price, which was when the car initially came out.

Right now even a standard used model currently goes for a price that is still dimed high. This might be the reason Katainen picked up the Tesla from the shop and even told the mechanic that he plans on exploring the whole car away.

For context, these cars come with an eight-year (or up to 150,000 miles) battery and drive unit warranty, but the warranties on older models are starting to expire, revealing the potential cost behind a full battery replacement.

In September, Electrek reported on a Tesla owner in need of a battery replacement on a Model S that was no longer under warranty.

As noted in the report, he was quoted $22,500 from Tesla, but ended up getting a repair for $5,000 from a third-party shop. Katainen’s quote was also from Tesla, and it’s uncertain whether he had access to alternate repair service.

Katainen Triggers the Explosion From Inside a Nearby Bunker

Either way, the group behind Pommijätkät strapped about 30kg (66 pounds) of dynamite to the car and said to have parked it in an old quarry in Jaala, Finland. Even Elon Musk was said to be there but in spirit.

A crash test dummy that was said to be equipped with a helmet, thick winter jacket, with the picture of Musk’s face was dropped in by helicopter and then stuffed in the driver’s seat.

Katainen was said to have triggered the explosion from inside of a nearby bunker, and Tesla erupts in a ball of fire, with what is said to seem like thousands of pieces that are scattering throughout the snowy landscape.

The group is also said to have picked up the remains of the car, which amounts to nothing but a pile of scraps. When he was asked whether he is ever had this much fun behind the wheel of a Tesla, Katainen replied that “no, never has he enjoyed that much with Tesla”.