Adidas is launching an NFT collection plus exclusive access to streetwear drops. Adidas is finally getting into the NFT game. Do you know that the apparel company is launching a line of NFTs on Friday, called Into the Metaverse, which will offer buyers access to what’s essentially a very exclusive fan club? 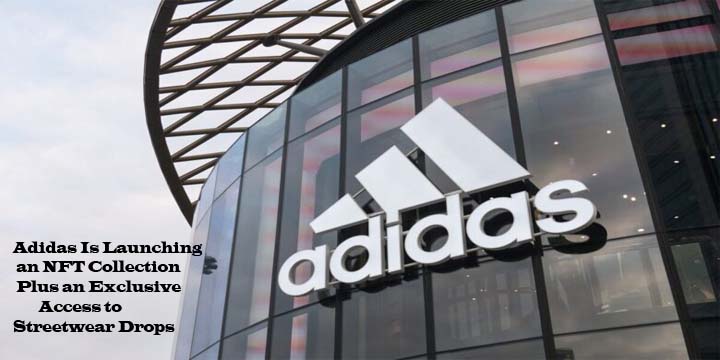 Well according to the verge, NFT holders will be able to purchase special merch drops, and Adidas says members will help to shape what kinds of products and experiences the company puts together for its NFT-owning community.

“Adidas is in the metaverse,” Tareq Nazlawy, Adidas’ senior director of digital growth, tells The Verge. “We want to figure out what would be the dopest thing to do in that space and start involving the communities we’re activating through this [NFT] in how we should manifest in the virtual world.”

The launch comes after a couple of weeks of crypto and metaverse hype from Adidas. The company launched digital tokens last month, which will offer holders early access to the NFT drop, and a couple of weeks ago, it began tweeting vaguely about the metaverse.

Adidas also bought a Bored Ape the company named the ape Indigo Hertz and outfitted it with a custom Adidas-branded tracksuit.

The launch comes after a couple of weeks of crypto and metaverse hype from Adidas. The company launched digital tokens last month, which will offer holders early access to the NFT drop, and a couple of weeks ago, it began tweeting vaguely about the metaverse.

Adidas also bought a Bored Ape the company named the ape Indigo Hertz and outfitted it with a custom Adidas-branded tracksuit.

NFT Buyers Will Get Access to “Digital and Physical” Adidas Products

The NFTs will sell for 0.2 ETH, or about $800 USD, starting December 17th through Adidas’ website. Adidas declined to share how many NFTs would be sold, citing “security protocols,” and declined to say whether the company would receive royalties on NFT resales.

The company was also unable to share imagery or a description of what Into the Metaverse NFTs will look like before this story was scheduled to publish.

NFT buyers will get access to “digital and physical” Adidas products and experiences. At first, the physical goods will include the tracksuit worn by Indigo, a hoodie with a blockchain address on it, and an orange beanie.

The merch is cobranded with a trio of collaborators: Bored Ape Yacht Club, the highly sought-after NFT collection; Punks Comics, which recently featured Indigo on an issue’s cover;

And GMoney, a pseudonymous crypto enthusiast who’s been consulting with Adidas on how to enter the NFT space in a way that feels authentic. The beanie is supposed to be the one worn by GMoney’s CryptoPunks avatar.

“There will be other experiences we’re putting together,” Erika Wykes-Sneyd, VP of marketing for Adidas Originals, tells The Verge.

“The intent is this thing, this NFT, you belong to a community, and we continue to add value to that over time, and it’s gonna also evolve with what we’re learning about the community how they’re changing and evolving.”

It’s a familiar formula for the NFT space. NFT project creators will tell you that the real value of their tokens comes from building a community around them and developing a roadmap to deliver new experiences. Adidas seems to be borrowing that approach, but it’s new to see a major company jump into the fray.

Nike Bought a Company That Makes NFTs and Virtual Sneakers

There’s a lot of opportunities here for Adidas. Streetwear enthusiasts are already used to competing to get limited-run product drops, and Adidas already has an app, called Confirmed, for selling special runs like Yeezys.

The Into the Metaverse NFT series just offers a new (and potentially even more exclusive) way to offer those kinds of drops.

Plus, the NFT space already operates a bit like pricey, hyped streetwear brands like Supreme. One of the key privileges thus far of owning a Bored Ape Yacht Club NFT is access to exclusive merch drops, like a hat and hoodie, which resell on eBay for hundreds of dollars beyond their sale price.

From that perspective, it was only a matter of time before an actual streetwear brand got in on the action. And it may not be long before others join them: just this week, Nike bought a company that makes NFTs and virtual sneakers.