7 useful Google apps you probably aren’t using. Google has a lot of apps, even too many, in some cases. The truth is that we all make use of google in our everyday lives. Google comes handy especially when it comes to searching for information and answers online. Although millions of users make use of Google every day only a few can actually utilize Google to its full potential.

In fact, Google is a very powerful search engine that offers a lot of great apps, features, and services that are not on the radar of many users. So, whether you make use of an iOS or Android device, it’s definite that you must make use of some apps in google on an almost daily basis. 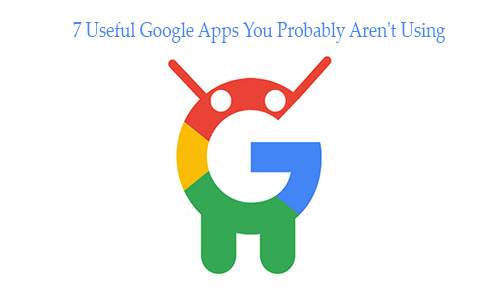 There are tons of amazing google apps out there. However, based on the kind of people using them, their usefulness can be limited. The fact of the matter is that you can use google as an ally when it comes to searching for millions of information and updates, google is hardly limited, just that a lot of users do not know how to make use of the Google app. In the midst of all these titles and overlapping of google, it’s obvious that the google play store wing holds some genuinely useful creations and treasures by the android creator that are not yet discovered. Are you tired already? don’t be, read on and you will see what you have been missing.

List of 7 Google Apps That You are Probably Overlooking

Below are some of the google apps that you probably aren’t using;

This app is helpful, should in case you lose your Android smartphone, the android device manager comes handy in helping you to locate your phone. The app is very useful in tracking and to get your lost or stolen device back.

This app is very useful and yet a lot of people fail to make use of it. The app is mostly for those who like to travel, all you need do is to point your camera on the text that you want to translate, and the app automatically translates it into over 30 languages instantly.

This app is one of the most powerful platform tools that you come across but doesn’t get enough attention. The apps make it easier to be able to gain access to any desktop computer using your android phone. All you need do is to install the companion desktop chrome extension, set up your pin, and wow, you can access your desktop to access files, open programs, or any other activities on you need do on your computer within the palm of your hand.

This app gives you the leverage of exploring the world through photos that have been taken by internet users at different places around the world.

This app is cloud storage that is available on the android device, where new users are offered 15GB for free for signing up permanently. More can still be bought if need be. What is so special about this app is that it has various android apps attached to it. these apps include google sheets, calendars, photos, Gmail, slides, docs, etc. the apps are available for use in case you want to do anything of productivity.

This apps allows you the freedom of shopping for anything of your choice from hardware to cosmetics just to name a few.

This app helps you to be updated about any trend app on google, just like twitter. It enables you to know the current and most popular google trends app.

These are the 7 useful apps in google that you probably don’t know about because you ignore them.