5G now means some flights can’t land when pilots can’t see the runway. Verizon and AT&T are hoping that the new swaths of C-band cellular radio spectrum will help make the 5G hype closer to reality, but the big mid-band 5G rollout could have a side effect. 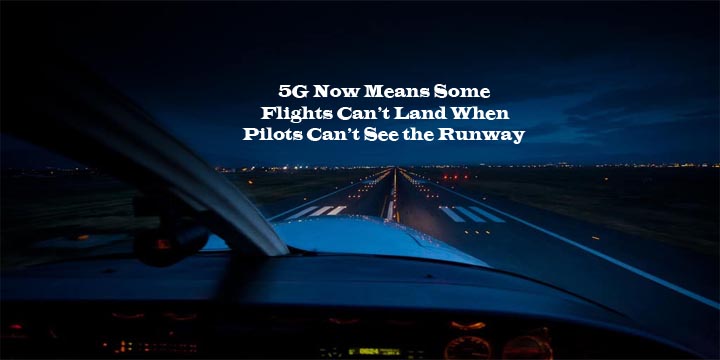 Airplanes are known to rely on radio altimeters to tell how high they are above the ground so as to safely land when pilots cannot see, and the FAA is now instructing 6,834 of them to not do that at certain airports because of the interference of 5G.

According to the verge, the FAA ruled on Tuesday that those thousands of US planes (and some helicopters) won’t be able to use many of the guided and automatic landing systems that are designed to work in poor visibility conditions.

If they are landing at an airport where there’s deemed to be enough interference that their altimeters aren’t reliable.

“Landings during periods of low visibility could be limited due to concerns that the 5G signal could interfere with the accuracy of an airplane’s radio altimeter, without other mitigations in place,” an FAA spokesman tells The Verge.

These Limitations Could Stand To Prevent Dispatch of Flights

That likely means flight delays: “These limitations could prevent the dispatch of flights to certain locations with low visibility, and could also result in-flight diversions,” reads a portion of the FAA’s written explanation.

“We are engaged with the wireless operators, as well as our interagency partners, to do everything possible to make sure the mitigations are tailored to prevent disruptions,” an FAA spokesman tells the verge.

The FAA ruling does give airlines and pilots an out if they can prove their airplanes have altimeters that are protected or are otherwise not going to be affected by interference.

No airline would comment to The Verge on expected delays, nor would the Airlines for America industry group that the airlines pointed us to.

It’s not yet clear which specific airports might restrict low visibility flight, but you can imagine that they’d likely be in the same places where the carriers are deploying mid-band 5G with a few exceptions, they’re the United States’ most-populated cities.

Verizon and AT&T Agree to Push Back Launch

Verizon and AT&T did agree to push back the launch of the C-band by one month (to January 2022), and also offered to dial back the power of 5G towers for six months past that to address concerns.

Carriers and their lobbying group, the CTIA, have suggested that there isn’t a valid reason to fear interference, but the FAA has so far not been convinced.

Nor was an aviation lobbying group, the Aerospace Industries Association, which sent a letter to the FCC on Monday suggesting that AT&T and Verizon’s proposed power limits don’t go far enough for safety. The FCC, not the FAA, is the entity that regulates wireless interference.

While C-band 5G and these radio altimeters don’t actually operate in the same band, the bands are close enough that the fear exists.

One possible solution is a band filter for those altimeters, but organizations like the Radio Technical Commission for Aeronautics (RTCA) have warned (PDF) that it might take years to certify them and retrofit all the planes.