Xbox Update for October Brings Night Mode and 4K Dashboard. October update for Xbox has arrived, and while it does not come with lots of interesting new features, the few that came with the update are major ones indeed. Chief among these new features that are in this update is the new 4K dashboard available for the Xbox Series X. Early adopters have long been waiting for this feature for quite some time, but it’s not the only notable feature included in the Xbox October update. 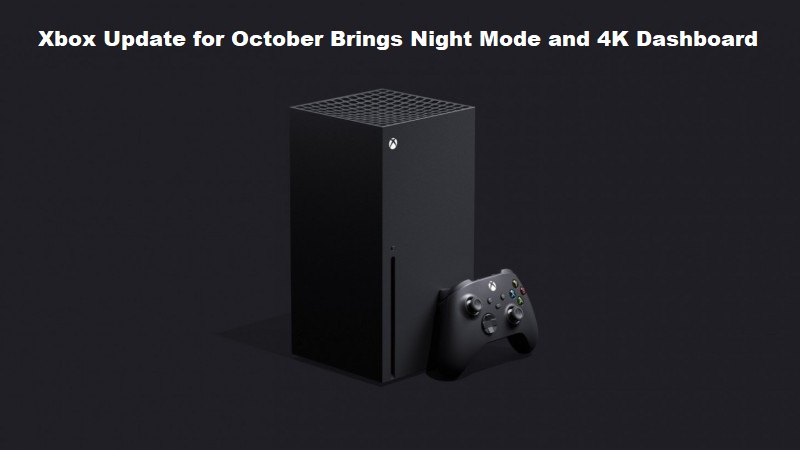 Right before the arrival of this update, Microsoft stated that the Xbox Series X dashboard and menus along with the Xbox Guide were rendered in 1080p and then upscaled straight to 4K. While this would take on a different look, it is no replacement for the proper 4K dashboard, and that’s exactly what we would be receiving.

If you connect your Xbox Series X to a 4k display after you have applied this update, you will see the dashboard and all of its parts rendered in 4K, With Microsoft stating that the game art and buttons will “have increased sharpness and much better and improved text readability” also

Coming in with the 4K dashboard is another interesting long-awaited feature for the Xbox consoles: night mode. After being tested back in August, Xbox night mode is now finally ready for prime time. The night mode feature would enable you to dim and then customize the display in other to add to the Xbox button on your controller and the power button that is right on your console. You even get to turn those buttons off entirely if you want to.

While night mode would be going live across all Xbox consoles today, Xbox One, One X, Series S, and Series X – the new generation consoles would be receiving a customizable blue filter also. Players would be given the opportunity to place their schedule for night mode, and any settings will be automatically applied to games and apps. You also can choose to find using the steps

Lastly, the update for October brings in a new quick settings menu to the Xbox guide, which would allow you to toggle certain accessibility options on and off with you having to exit games and apps.

Now, it seems like quick settings would see the most use in multi-user households. The update for the October Xbox update is going live today, so make sure that you download it and take interesting features like the Night Mode for a fantastic spin.