Web Development And Its Importance

Learning about web development is like playing the game of chess for the first time. It seems complicated at first but when the player gets used to it, he/she finds it interesting and easy. 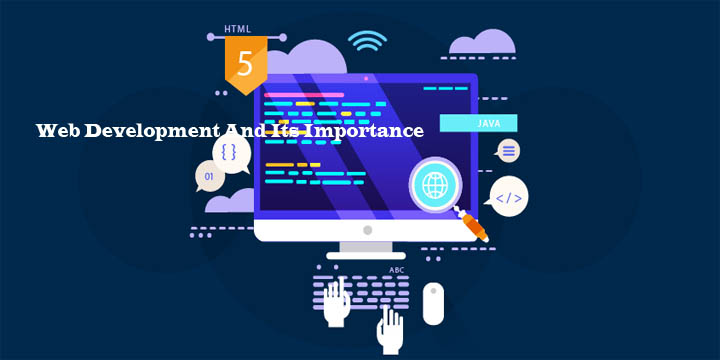 What is Web Development?

Web development involves the creation of websites that goes from creating a single webpage to complex web applications.

Now, the next question to consider is,

It is the files stored on servers (computers that store files for websites). These servers are connected to a giant network called the internet. It is a vast field but it is mainly divided into two parts – The frontend side and the Backend Side.

The Parts of Web Development

The Front End part(client-side) is the side of a website or software that you see and interact with as an internet user. When website information is transferred from a server to a browser, front-end coding languages allow the website to function without having to continually “communicate” with the internet.

Front-end code allows users like you and me to interact with a website and play videos, expand or minimize images, highlight text, and more. There are many frameworks and languages to be learned on the front-end side. Some of these languages are as mentioned HTML, CSS, JavaScript, jQuery, Angular.Js.

Now moving up to the backend it is also called “server-side “(more like the invisible side). It is the side that you don’t see when you use the internet. It’s the digital infrastructure, and to non-developers, it looks like a bunch of numbers, letters, and symbols.

On the front-end part, there are fewer languages but, on the backend, there are many languages and frameworks to learn to get commands on that. Some of them are listed above PHP, Java, SQL.

Why is Web Development Important and what are the types

If you are a business owner hiring a freelance developer to build your website, a marketer pitching a vision to your development team, or a student learning about development as a career. Regardless of who you are or why you’re reading this guide, understanding the basics of website development can be helpful in this technology-driven world.

The internet isn’t going away anytime soon. In fact, it’s become a portal and primary method of research, connection, education, and entertainment in the world.

As of 2019, there are 4.2 billion global internet users. That’s more than half the world’s population, and these folks are using the internet for a vast variety of reasons.

What’s the one thing those reasons have in common? They require a website, and each website requires a skilled web developer.

Web development is also a rapidly expanding industry. Between now and 2028, the employment of web developers is expected to grow by 13%. That’s much faster than most other technology careers.

Whether you’re looking to hire a web developer or become one, you should understand the different types of web development that developers can master — we dive into this below.

The different types are as follows

As the usage of the internet becomes more important, web development becomes important. To start with the basics of web development it is always advisable to go with a beginner-friendly course on any learning site like udemy, Coursera, etc. Start learning and practicing practically instead of theoretically. For writing code, you can refer to sublime text, VS Code, or Atom.