The Umbrella Academy is an American superhero streaming television series based on a comic book series of the same name. the movie was written by Gerard Way and it was released on 15, 2019. It was created for Netflix by Steve Blackman and developed by Jeremy Slater. 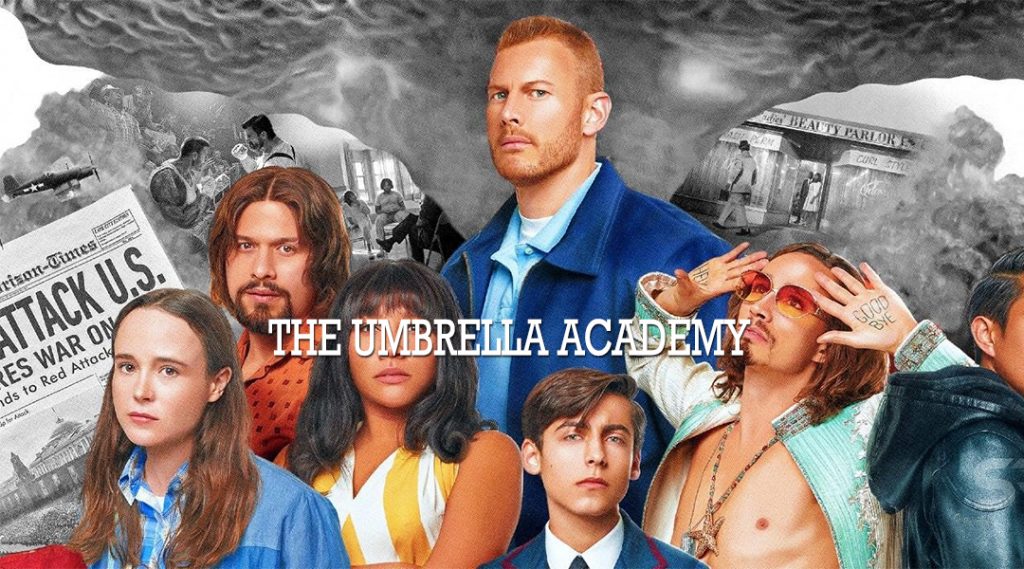 The movie is all about a family of adopted sibling superheroes who reunite to solve the mystery of their father’s death and the threat of an imminent apocalypse. The series is produced by Borderline Entertainment, Dark Horse Entertainment, and Universal Cable Productions.

The first season was released on Netflix on February 15, 2019. In April 2019, Netflix stated that 45 million households had watched season one during its first month of release, thus becoming one of the most-streamed series of the year. To tell you how interesting the movie is.

That same month next to the success of the first season, the series was transformed for a second season, which was released on July 31, 2020.  Both seasons received positive reviews from critics. In November 2020, the series was renewed for a third season, set to be released in 2022.

The rest are the main character with great activities they perform. Some cast was not stated here.

A brief explanation of the Umbrella Academy

The first season is set in the present day, where Luther is part ape and has lived on the Moon for four years, Allison is a famous actress, Vanya is a violinist, Klaus has a drug addiction, five disappeared sixteen years earlier, Ben, now deceased, is a ghost able to converse only with Klaus, and Diego has become a vigilante with a penchant for trouble.

The estranged siblings learn that Reginald has died and gathered for his funeral. Five returns from the future, revealing that a global apocalypse is imminent, but is chased by time-traveling operatives Hazel and Cha-Cha.

Meanwhile, the reunited siblings try to uncover the secrets behind Reginald Hargreeves’ life, as their dysfunctional relationships are strained further.

The second season technically takes place fifty-six years earlier, but each character has experienced a different amount of time since the events of the first season. Failing to stop the apocalypse, the siblings are forced to travel back in time, but it goes awry, scattering them between 1960 and October 1963 in Dallas.

Five arrives there on November 25, 1963, minutes before a nuclear doomsday linked to JFK not being assassinated, but with the help of Hazel manage to travel back ten days. While being hunted by a trio of Swedish assassins, five find his siblings, who have each made new lives, and attempt to reunite them in order to stop this new apocalypse.

The official date has not been announced but will be released this year. With two world-ending apocalypses averted, there’s a good chance that preventing some kind of Armageddon will be on the agenda again.

It would be a refreshing change of pace if it didn’t but, considering that there’s always an apocalyptic threat in the comics, expect another one in The Umbrella Academy season 3.

Each of the seasons has 1 to 10 episodes. Season 1 of episode 1 starts this way. In 1989, forty-three women simultaneously give birth, despite showing no prior signs of pregnancy. Seven of the children are found and adopted by eccentric billionaire Sir Reginald Hargreeves, who raises them as a superhero team.

Hargreeves calls the children by number, one through seven, but Grace, their android mother, gives them names. Years later the surviving children are grown and reluctantly reunite for Hargreeves’ funeral.

The monocle that he always wore is missing after his death, leading Luther (Number One) to suspect foul play. Number Five, who disappeared 16 years before, appears in a ball of blue energy, claiming to have returned from the future.

He has his 13-year-old body but claims that he is fifty-eight years old. Tensions emerge among the siblings, and Diego (Number Two) gets into a fight with Luther that destroys a statue of their dead brother, Ben (Number Six).

Later, five is visiting a doughnut shop when several armed men enter and open fire. After killing the men, he removes a tracker embedded in his arm. It is revealed that Diego has the monocle and that Klaus (Number Four) can talk to Ben’s ghost. Five warns his estranged sister Vanya (Number Seven) that the world will end in eight days.

There is more episode to watch, you can download the movie from season 1 which contain episode 1 to 10, and season 2 same episode.  Season 3 has not been released but it will be coming out this year 2022.

When will the umbrella Academy season 3 be Release

I don’t have an official release date for season 3 yet. What I do know, however, is that it will arrive in 2022. As revealed on the show’s official Twitter account, The Umbrella Academy season 3 will launch exclusively on Netflix this year.

Who is returning in season 3 on the Umbrella Academy?

The following are cast that will be returning to the Umbrella Academy.

Thanks for reading. Further research can be done on Google.