With photoshop being updated on iPad, Adobe announces that The Magic Wand Tool will be Brought to Photoshop for iPad. Originally, the magic wand (a classic desktop tool) was missing from the launch of Photoshop on Android. 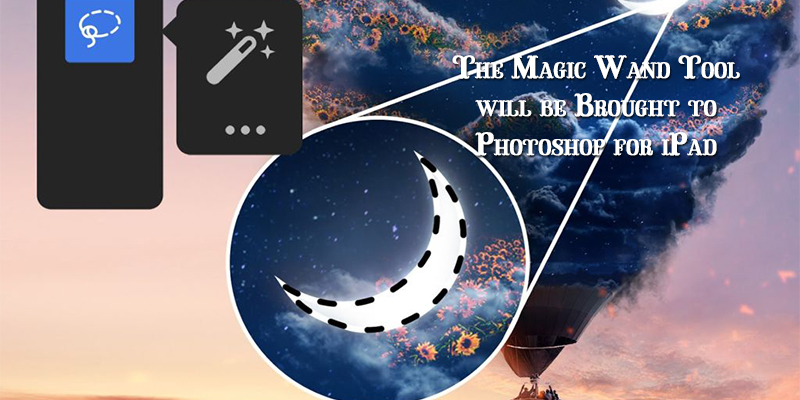 Take note that some of the intelligent selection features from the magic wand have been introduced to the iPad app in the past. However, Adobe has now announced that they will be adding the tool itself hence making it easier to select, adjust or remove specific elements of a larger project with a tap.

With the introduction of the magic wand feature on iPads, we expect it to be similar to that of the desktop version. The tool literally makes it easier to extract objects from a flat background, select oddly shaped areas or select a specific colored section of a project to then transform in the usual photoshop methods.

The Magic Wand Tool will be Brought to Photoshop for iPad

In addition to the release of this wand feature, Adobe is also introducing a new way for users to share and project what they are working on to a larger screen via canvas projection. The original idea I that by enabling canvas projection and connecting an iPad to an external display with USB-C or HDMI, you can very well display your project in full screen without Photoshop’s UI getting in the way.

iPads before now can already connect to external displays and it’s even simpler on an iPad pro with a USB-C port. Nevertheless, Photoshop’s feature should make it easier to share just what you are actually working on without the distracting menus.

Is Photoshop being Updated on the Desktop Version Also

Adobe is adding more skies to use with the sky replacement tool under a new “Get More Skies” option. Also, an improved transform warp tool with Independent Bezier handles is going to be added and this should make it even easier to adjust images wrapped around unusual shapes.

With the new updates rolling out to the iPad version of photoshop, the app is starting to look like the real thing. While the improved transform warp and sky replacement tools are exciting, it may be the iPad improvements that are going to leave users most thrilled. More research can be done on Google.