The imminent end of smartphones is here and closer than you may have initially thought. It is true that every piece of tech rises and then only to fall again and soon it will be the turn of the smartphone. But come to think of it, what will replace it after it’s gone? 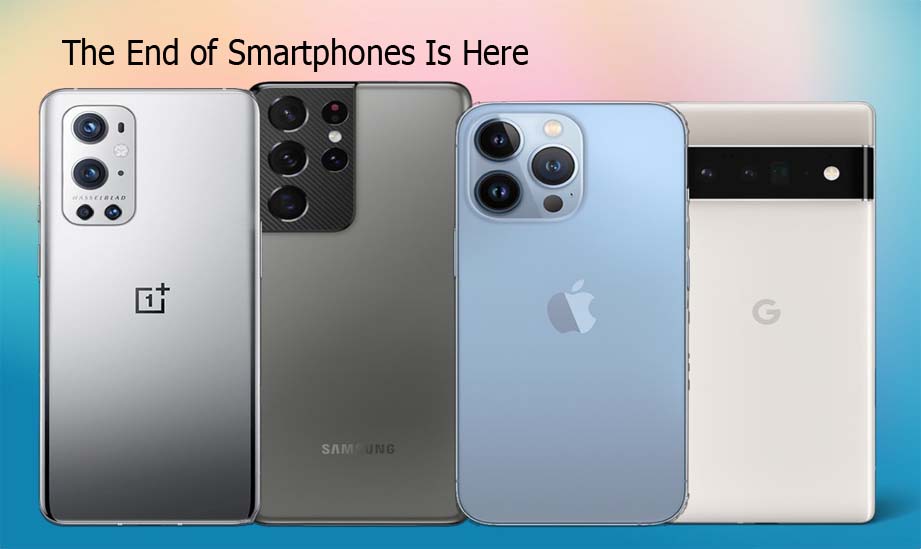 The End of Smartphones Is Here

Back in 2007 with the arrival of the original iPhone, a revolution was birthed in how we utilized computing power, transforming it from what used to sit on a desk to something that could be carried easily and in our pockets and also accessed at all times.

And after a long decade of intense change, I think that the smartphone is at the peak of its powers. The smartphone is our constant digital companion after absorbing the features and abilities of the TV, camera, PC, and many more others along the way.

Innovations regarding smartphones are coming to an abrupt halt. And with its constant change, I don’t think there is anything more to add to a handset as it now seems that adding a curve to the screen is now considered the state of art. Truth is, our smartphones are filled with smart features that almost everyone doesn’t even know exist and most certainly have never even made use of.

It has taken the smartphone ten years to get from its very first version to near complete. So after this, what comes next?

It looked for some time like wearables would be the next big thing. However, it is proving too hard to fit enough processing power and battery into a smartwatch to make it a better alternative to phones. These two problems could however be overcome, but the screen is never going to be big enough on any type of wearable for it to be the primary means of connection to the digital world.

The latter actually leaves augmented and virtual reality as the main candidate. Both of these platforms have been tried out and they are really stunning and next-gen technologies that the world is still continuing to ignore.

I however think that one day that will change and the smartphones of today already contain the seeds of their own downfall. Smartphones like the Samsung Galaxy S8 can function as a VR when connected to headsets. This alone is not enough to create much of a breakthrough in VR usage. It will however give customers the idea as to what they should expect.

Will Smartglasses Bring an End to Smartphones

My best guess, however, is that, once the idea of AR/VR becomes more popular, smartglasses will make a comeback, eventually. A lot of things already count against smart glasses such as the glasshole effect which has already been well documented. And many people would not like to wear glasses due to the barrier that they can create especially when a person is reading something on the glasses lens instead of paying attention to a conversation.

Smartglasses however will be a stepping stone to smart contact lenses or maybe even the mind-reading technology announced by Facebook last week. Elon Musk has even talked about something similar in nature.

Will the Smartphone Die Off?

The smartphone will not entirely die off. Normally old tech doesn’t just die off, but instead, they just find their space and fossilize. And the closest model we have to this is the PC with its fast adoption to saturation level and then a long time of stagnation before a late surge of innovation before finally settling into a comfortable niche.

And over the next ten years, the smartphone will do exactly the same thing. The truth is that people will still continue to make use of smartphones for decades just as people still make use of pagers. Silicon Valley however is looking past smartphones currently and for the future.

The Problem with These Set of Technologies

The problem with all of these future techs like the VR and the idea of using sensors in reading thoughts bring up question marks around privacy and also the appropriate utilization of tech and the impact it will be having on society.

Questions like these have already risen before in the smartphone age such as how appropriate is it to be tracked wherever we go and what it would mean for society if we are to spend more time interacting with our smartphones than we do with each other.

But as smartglasses or mind-reading technology makes our relationship with technology close and hard to navigate, we may have to look back on the complications of the smartphone era with nostalgia.