Spotify’s Play Button Stops Shuffling because Adele said so. LONDON — Adele carefully curated the order of songs on her newly released, “30,” calling the 12 tracks her “ride or die throughout the most turbulent period of my life.” 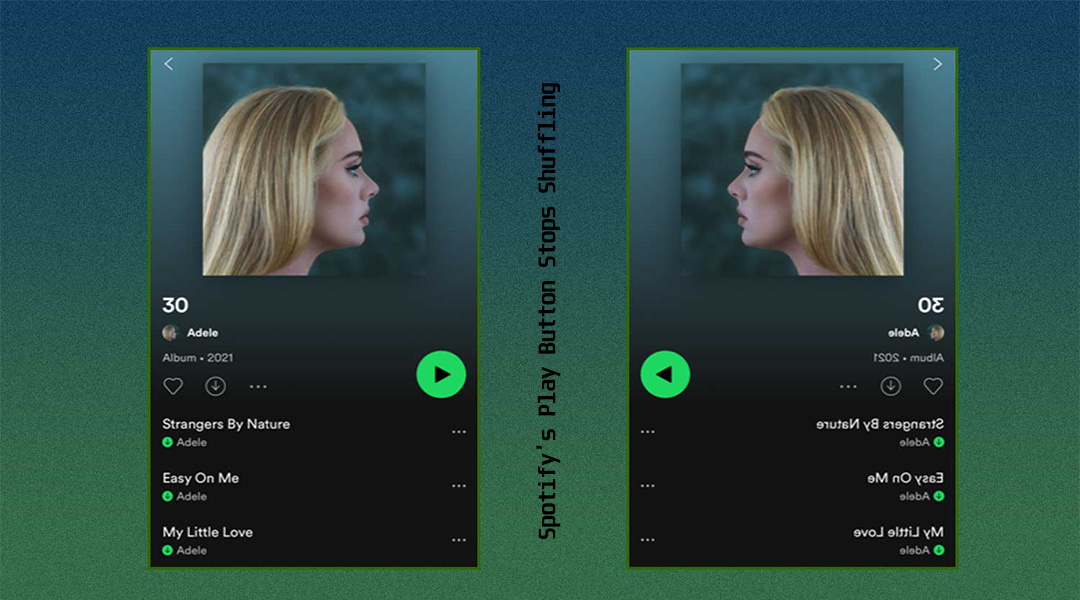 But a Spotify setting that shuffles album tracks in a random order apparently threatened to disrupt the flow of her musical narrative.

“This was the only request I had in our ever-changing industry!” Adele tweeted Saturday, asking that the album be streamed with the tracks in order.

“We don’t create albums with so much care and thought into our tracklisting for no reason. Our art tells a story and our stories should be listened to as we intended,” she continued before thanking the platform.

“Anything for you,” Spotify tweeted in response to the singer. The streaming giant removed the shuffle play button from the top of the page for “30.” The option to shuffle the album still remains.

According to the Washington post, as the star’s album stirred a wave of emotions among Adele’s fans since its release Friday, so did this public exchange.

Some on social media questioned who would dare listen to a newly released album for the first time on shuffle, while others seemed concerned Adele had forced Spotify to ban the shuffle button entirely.

“Adele is 100% right. People who listen to albums on shuffle are definitely insane,” read one tweet, while another fan wrote: “I love you @Adele but let me shuffle in peace haha I love the randomness.”

“Adele’s 30 is somehow a story. Try listening to the album from start to end. It feels like she’s telling her story – her darkest hours, divorce, herself,” read one tweet, while another fan put it simply: “Adele has spoken. Never shuffle albums.”

A Spotify spokesperson issued a statement to The Washington Post and other outlets on Sunday, trying to clear up any confusion: “As Adele mentioned, we are excited to share that we have begun rolling out a new Premium feature that has been long requested by both users and artists to make ‘play’ the default button on all albums.

For those users still wishing to shuffle an album, they can go to the Now Playing View and select the ‘shuffle’ toggle. As always, we will continue to iterate our products and features to create the best experiences for both artists and their fans.”

Many Spotify users have long questioned the shuffle setting. In a blog post published on a Spotify help forum in 2019, one listener by the name of Mark expressed his frustration, writing: “Surely it would make more sense to just start a playlist in order and then choose Shuffle play if you want rather than mess it up by doing it this way.”

After a six-year break, Adele released an emotive album that covers heartbreak, divorce, and the paranoia that often comes with parenthood.

Just 24 hours after the release of her first song from the album, “Easy on Me,” the star shattered records on both Spotify and Amazon Music.

“On Friday, October 15th, Adele’s Easy On Me became Spotify’s most-streamed song in a single day,” the audio company confirmed as Amazon said the single had received “the most first-day Alexa song requests in Amazon Music history.”

The star’s return to the limelight has made headlines all over the world. In a recent sit-down interview with Oprah, Adele discussed a range of topics, including her divorce, weight loss, and her new boyfriend, Rich Paul.

And as part of a CBS special, titled “Adele One Night Only,” the star took to the stage once again at the Griffith Observatory in Los Angeles to belt out songs while also helping to orchestrate a romantic proposal for a couple and serenading them with her 2008 cover song “Make You Feel My Love.”