Poland School System? Education is compulsory and begins at the age of six from the mandatory kindergarten.  At the age of seven, children start the first grade of primary school (Polish szkoła podstawowa) lasting for eight years (the duration was six years prior to 2017) and complete it with an exam. 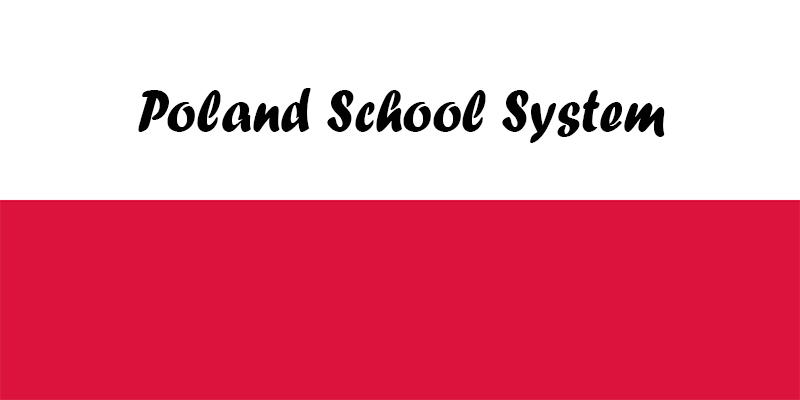 However, education is compulsory for all children ages 8 to 16, and the most recent reform of education raised the upper age limit to 18. Primary/elementary school begins at age 7 and ends at 13. Nevertheless, the reformed secondary education still consists of two systems; based on the old one, education begins at age 16 and ends at age 19 or 20 for technical schools, and, according to the new, the age range is from 16 to 18.

Check out the basic education system in Poland below;

Before primary education, 1 year of preschool education to stimulate primary reading skills and mathematics is compulsory. So, children proceed to primary school from ages 7 – 12. The first cycle of grades 1 – 3 is beginner phases (with a single teacher), while grades 4 – 6 introduce systemic learning. However, its subjects include art and music, crafts and technology, Polish, mathematics, .social and natural environment, and physical education. In Poland, Primary and secondary education is free.

Students at vocational schools may move into post-secondary schools if they want to, where they are trained as accountants, administrators,  computer specialists, nurses, and librarians, etc.

Polish tertiary institutions are as follows; universities, economic and agricultural academies, and polytechnics. Poland has a tertiary education tradition that dates back for centuries. Thus, the oldest university is the Academy of Kraków founded in 1364, and there are 18 more besides. And there are also numerous technical, medical, and agricultural universities, subject-specific colleges for teaching, music, theological, economic, and maritime skills.

Quality of Education In Poland

Poland schools are doing well on this front. Thus, the evidence from the Program for International Student Assessment (PISA), which assesses the mathematics, reading, and science competencies of 15-year-olds in over 60 countries across the world every three years, points to an impressive transformation in the cognitive skill set of the youth in Poland between 2000 and 2012.

However, Poland increased its scores in mathematics, reading, and science to the equivalent of what students would have learned in one additional year of schooling.

Currently, the proportion of students at the top performance level have increased, and the share of students who are poor performers has reduced. Also, students from poor and well-off socioeconomic backgrounds alike saw performance improvements.

Another interesting thing is that Poland’s PISA scores are now above the OECD average and at the same levels as in countries such as Finland and Germany. All this was successfully achieved with stable levels of education spending, at about 5 percent of GDP and below the OECD average. More research can be done on Google.