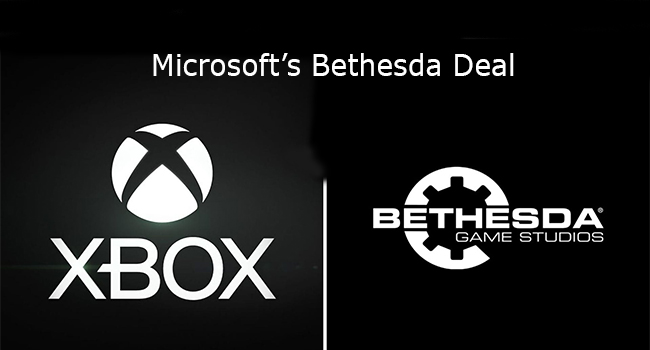 Microsoft’s Bethesda Deal is expected to get finalized in the second half of the fiscal year 2021. In a released note, Microsoft wrote; “With more to add to the Bethesda, Microsoft will grow from 15 to 23 creative studio teams and group. And also, will be adding the Bethesda’s iconic franchises into Xbox Games Pass”.

In what is set to be among the largest ever acquisitions in the video game industry, announced by Microsoft on its reached deal to acquire ZeniMax Media which is the parent company of popular video games publishers Bethesda Softworks, for $7.5 billion.

After the deal has been finalized, all of the Bethesda properties which include The Elder Scrolls, Fallout, Wolfenstein, Quake, Starfield, and DOOM, will then be owned by Microsoft company. Therefore, these series will be added to the Xbox Game Pass which is a subscription-based cloud gaming service that has topped about 15 million subscribers. The Bethesda deal has expected is set to be finalized in the second half of the fiscal year 2021.

Features of the Deal

This deal also includes Microsoft’s intent to bring Bethesda’s future games into Xbox Game Pass the same say it is launched on Xbox or PC. The deal is three times the $2.5 billion paid for Mojang by Microsoft. Mojang is the company behind the Minecraft, in 2014. And it will be Microsoft’s most expensive video game acquisition ever known. Microsoft is an amazing partner and offers partnership access to resources that will make individuals in the partnering company a better publisher and developer.

Microsoft rival and competitor Sony has already started accepting pre-orders last week for its PlayStation 5. Jijiashvili who is a senior analyst in charge of video games research in Omdia, said that; “I think the announcement on the sales of PlayStation 5 and Xbox Series X at launch has little to no impact. And this is because the reality is that most of the console gamers have set their minds on a particular console among either of them already”. In conclusion, the deal is more of a long-term investment.

Jijiashvili also said that Sony is still in a better position than Microsoft and expects PlayStation consoles to outsell Xbox consoles two-to-one in the first couple of years. This deal won’t be finalized until next year, and it won’t have an immediate impact as predicted.

A Bethesda Executive Producer, Todd Howard wrote in a blog post that “Like our original partnership, this is about more than one system or a screen. We share a deep belief in the fundamental power of games with our partners, and in their ability to connect, empower, and bring joy to our consumers”.

For more information you can check https://www.npr.org/