Messenger Kids App Adds Dark Mode and New Voice Effects. Messenger Kids, the child-friendly version of Meta’s Messenger service (aka Facebook Messenger), is being updated with a dark mode, as well as new audio effects for voice messages, the service has announced. 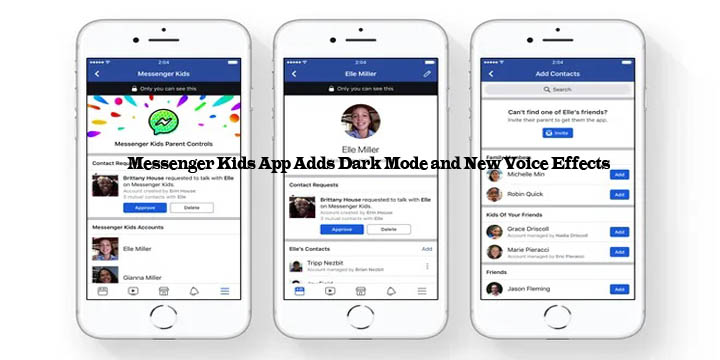 Dark mode came to the main Messenger app at the beginning of 2019, but now it’s also coming to the version of the app that’s designed for children between the ages of six and 12.

Perfect for any kids preparing for a difficult teenage goth phase. It’s coming to the iOS version of the app first, with Android to follow.

Meanwhile, voice effects are rolling out in the weeks ahead and, like the service’s dark mode, will be coming to iOS first.

They sound like a fun addition, working with the service’s existing voice messages feature to let a child sound like a robot, ghost, gorilla, mouse, or like they’re talking into a seashell. The five options appear after recording a voice message, allowing you to adjust it before it’s sent.

The verge added that alongside these two new features, Messenger Kids is also adjusting its games feature to let children start two-player built-in games from within a chat using the orange controller icon.

These were previously tucked away in a separate Explore tab. This change is coming to iOS first, with Android to follow.

Although it hasn’t been without its share of controversy, Messenger Kids has largely flown under the radar in recent years. Especially compared to Instagram, which was forced to publicly distance itself from reports it was working on a version of Instagram for children under 13 earlier this year.

But with these inoffensive features like audio effects and a tightly parental-controlled design, Messenger Kids has broadly escaped similar levels of criticism.

Messenger Kids is a free video calling and messaging app for smartphones and tablets. Parents control the contact list, and kids control the fun. Keep in touch with close friends and family with fun-filled features like filters and stickers.

Messenger Kids is full of features just for kids. They can start a one-on-one or group video chat with parent-approved contacts – directly from the home screen. They’ll be able to see when their contacts are online, and then they can send them photos, videos, or text messages.

How to Use the Messenger Kids App

To help your kid connect with friends just follow the steps below;

It’s as simple as that; just follow the steps above correctly.

Just like what its name suggests, it is a feature in Messenger that lets you change your messenger appearance from the light theme to the dark theme. When in dark mode, the messaging app’s background color switches to black while the text color switches to white.

The idea behind dark mode is that it reduces the light emitted by device screens while maintaining the minimum color contrast ratios required for readability. Both iPhones and Android handsets offer system-wide dark modes.