The latest updates on the iOS version come with very amazing iOS 14 Features. Some of these features range from the camera improvements to a picture-in-picture PiP mode and new privacy features. Months before the iPhone 12 trends were officially released, Apple released the iOS 14.1. The bug-fixing update intensify all the latest features and capabilities iOS 14 brings to the iPhone and iPad trends. 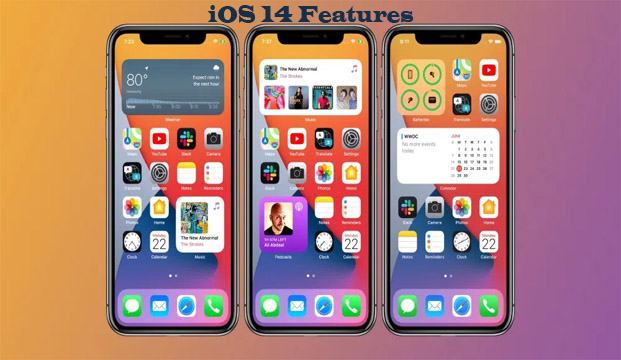 After cross-checking the iOS 14 and iPadOS 14, it was found that there are lots of features and tweaks attached to it, settings and tools that ensure to adjust how you use your current iPhone and iPad display. For instance, iOS users can personalize their iPhone’s home screen by creating a custom app icon and placing new widgets wherever they want it placed.

Here are the best features are seen for iOS 14 and iPadOS 14 update:

The iPhone gained a new app arrangement feature called the App Library. This acts as an arrangement centre to store all of the apps you don’t regularly use. You can access the App Library by swiping from to the left end on your home screen. Another feature for the iPhone iOS 14 is the ability to display widgets on the home screen. Apple provided developers with this tool to create a new style of widget that ensures to make your phone looks amazing.

Make your own app icons:

Apple has also added a new feature to its Shortcuts app, with this most popular addition brings iOS users the ability to create their own app icons and fully customize the look of your phone. Instead of using Apple’s Mail app icon, users can download any icon to replace it. For example, a picture of a cute cat or the Gmail icon and use it to launch the app. The process is somewhat tedious, but if you want a home screen that’s unlike any other, it’s well worth your time.

How To Do Video In Video Multitasking In iOS 14

Picture-in-Picture comes to the iPhone:

Apple device users will no longer be forced to choose whether they want to watch a Twitch stream or browse Reddit on their iPhone. With the latest iOS 14, you can do both at same time now after Apple has added a picture-in-picture mode. Though iPad has access to this feature for years now, and it’s amazing to know that the iPhone mobiles get it as well. When you start watching a video, all you need to do is to leave the app and go back to the home screen to access the PiP mode. Though there are few apps, like YouTube, that don’t support the PiP feature. To see the list of all the apps installed on your iOS phone that support the PiP is by going to Settings > General > Picture in Picture.

Apple has formally added these features some years back, but users still couldn’t access apps like Gmail or Outlook as their default email app. Apple has limited this new feature to only the email and web browsers features. And now you can make other web browsers and mail apps as your device iOS mail or browser app.

Keeping user’s information private is one of Apple’s major marketing points, and iOS 14 is going to furtherly assist more in keeping user’s information private. There is a new setting for sharing location. This setting will give limits to whether any used app gets your exact location or a preferred general location. There’s also a new notification dot that will tell you when an app is using your phone’s camera or mic, and finer controls over which photos an app has access to.

This is a new feature in the Camera app. It is a setting for the front-facing camera that ensures to help your selfies bright and amazing. The new mirror mode allows the camera to feature more like a mirror. And this can make it easier to ensure your shot is framed and just inline with the way you desire.