Indian Politicians Accounts have been Unblocked on Twitter after being Suspended for Violating Disclosure Law. After the accounts of several politicians in India’s opposition party were suspended after their leader tweeted a photo of himself with the parents of a girl who was allegedly raped and murdered in New Delhi, they were reinstated. The opposition party leader Rahul Gandhi had tweeted his support of the girl’s family saying that they deserved justice and others shared the tweet. 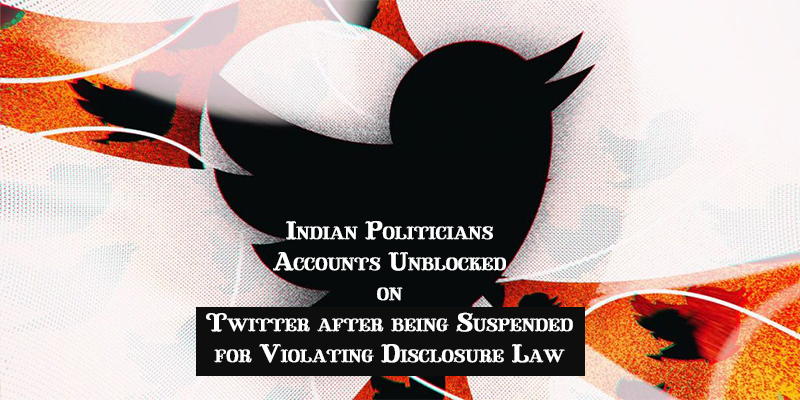 The problem here was that Indian law prohibits the disclosure of the identities of children and sexual assault victims. According to a notice posted on the Lumen database, Twitter was requested to take action by India’s National Commission for Protection of Child Rights. According to an article on The Verge, a Twitter spokesperson said to them in an email that Gandhi submitted a copy of an authorization letter from the people in the image to the company’s India Grievance Channel, and his account was reinstated.

Regardless of the fact that the Twitter accounts that were suspended have been reinstated, the tweet in question of which has been shared over fifteen thousand (15,000) times will remain withheld in India even though it is visible globally. Information gotten on The Verge says that Twitter appointed its grievance officer earlier this month to comply with new internet rules in India governing social media platforms. One could say it’s been a bumpy few months between twitter and the Indian government.

Earlier this year, the government warned that the company (Twitter) could face unintended consequences if it failed to follow the rule. Later on, they informed Twitter that they had lost their legal immunity for its user’s posts because of its non-compliance.

Before now, Twitter’s moderation policies have also been criticized by Indian officials hence police raided Twitter’s offices in Delhi and Gurugram in May. This was after the platform labeled a tweet from a government official as manipulated media. However, in other instances, Twitter has taken action at the government’s request as they suspended more than five hundred (500) accounts and reduced the visibility of hashtags.