How much is Facebook Stock? Facebook, Inc. (FB) is an American social media and technology company founded in 2004 by Mark Zuckerberg. The business is focused on providing services and products that allow people to connect and share content through computers, mobile devices, and tablets.

Over the years, Facebook has grown to become one of the world’s most valuable companies by market capitalization. Together with Apple (AAPL), Amazon (AMZN), Netflix (NFLX), and Alphabet’s Google (GOOGL), the business forms the FAANG group, an entity that represents the five most popular and best-performing US-based technology companies. 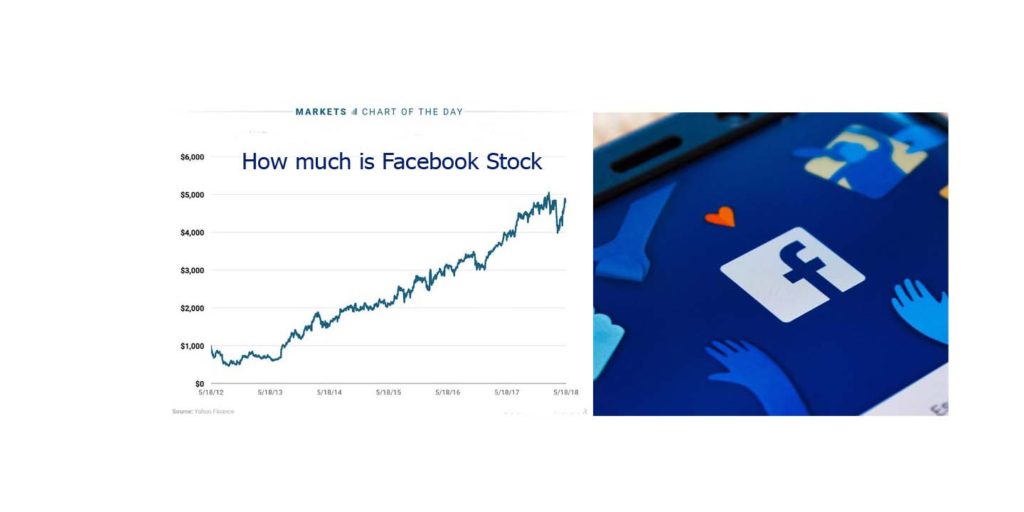 Facebook shares are traded on the NASDAQ stock exchange under the ticker symbol FB. The company is a constituent of the NASDAQ 100, S&P 100, and S&P 500 indices. Throughout its history, the firm has made a number of acquisitions to diversify its business portfolio and expand its market presence.

Today, the company keeps its leading position as one of the world’s most popular social networking services providers. In Facebook’s “family of apps”, Facebook Messenger and WhatsApp stand at the forefront of all messaging applications in terms of user numbers. Currently, WhatsApp has over 1.6 billion active users, while FB Messenger is used by 1.3 billion users. In total, all apps run by the company have more than 2.9 billion active users per month.

In regard to the history of the Facebook stock, the company filed for an initial public offering on the 1st of February, 2012, with the intention to raise $5 billion. Underwriters evaluated Facebook shares at $38 each, giving the business a valuation of $104 billion.

Two days before going public, Facebook announced that it would sell 25 percent more shares than initially planned due to high demand. On May 18, 2012, the stock started trading on the NASDAQ exchange, ending the first day at $38.23 per share.

In total, the company raised over $16 billion, making it the largest technology IPO in US history at that time. However, Facebook’s stock price gained a downside momentum shortly after, posting a record low of $17.55 only a few months later. Only in the third quarter of 2013, the sock completed a 100 percent retracement into the prior high, generating a high-volume breakout that attracted widespread buying interest.

Over the following six years, with the exception of short-lived negative fluctuations, the FB share price had mainly been in the uptrend. On the 25th of July, 2018, the FB stock value peaked at $217.50. Concerns mostly driven by data privacy issues and the Cambridge Analytica scandal had a severe impact on Facebook’s stock price. It hit investor sentiment, with the share price falling as low as $176.26 by the 26th of  July, 2018.