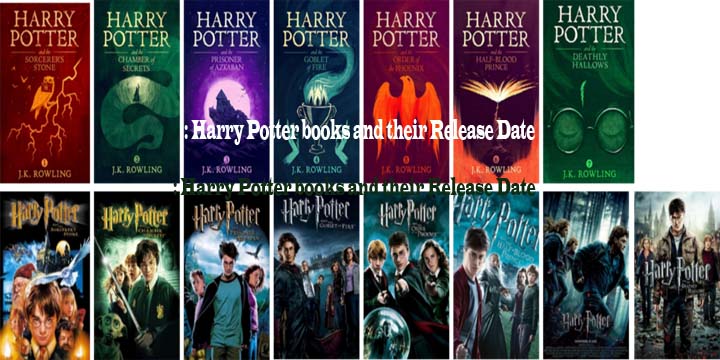 Harry Potter series is a franchise of the magical adventure of a young Wizard-Harry Potter who goes to a magical school to learn his wizardry skills and soon discovers his destiny.

From the beginning of the Harry Potter series till now, there have been 7 releases of Harry Potter books, and if you’ve seen these movies, you’ll know it’s virtually impossible to rank these books from best to worst because their stories are very brilliantly crafted and written.

In this article, we will be listing all Harry Potter books in order of chronology, since this is the best way to enjoy the book, the movies, on the order hand, could be seen in order of release date or chronology, depending on the viewers’ choice.

The list below contains all Harry Potter books in order on how the story was written, so those of us Potterheads who want to hit the highlights of one of our best magical movies of all time, or for some of us that join want to start their journey into the Harry Potter franchise, this list is a comprehensive guide to walk you through.

HARRY POTTER AND THE SORCERER’S STONE (1997)

The book talks about how Harry Potter discovers his true identity on his eleventh birthday, and how famous he is in the magical world for having vanquished the evil tyrant- Lord Voldemort when he still a little child. This revelation sets him on a journey where he goes on master his powers in the Hogwarts school of wizardry.

HARRY POTTER AND THE CHAMBERS OF SECRET (1998)

The second book of the Harry Potter series tells us about how Harry and his buddies meet Tom Riddle for the first time and battle a serpent.

This is the third book of the Harry Potter series, where Harry Potter meets his godfather, who was wrongfully accused of killing his parents, for the first time.

The fourth book of the series talks about how Harry Potter entered the Triwizard tournament by mad-eye moody, where he has to battle to save his life.

HARRY POTTER AND THE ORDER OF THE PHOENIX (2003)

These books narrate the death of Harry’s godfather, Sirius Black, and how Harry and his friends battle the keep the prophecy from Lord Voldemort.

HARRY POTTER AND THE HALF-BLOOD PRINCE (2005)

This is the sixth book of the series- Harry Potter travels with his headmaster Dumbledore, to gather pieces of the Lord Voldemort that are hidden in objects all over the world to defeat him. In the course of the adventure, Dumbledore gets killed by Severus Snape, a professor at Hogwarts.

HARRY POTTER AND THE DEATHLY HALLOWS (2007)

This is Harry’s final battle with evil Lord Voldemort, and how the evil lord and his family attack Hogwarts.

While this not part of the seven books series released, this is a stage play that has generally been accepted as an addition to the Harry Potter Franchise.

To get any of the Harry Potter books, click on the link on any of them, and you will be redirected to where you can get these books.