Frances Haugen Is Kicking Congress into Gear on 230 Reform. Facebook whistleblower Frances Haugen is at it again as she testifies for the second time before Congress on Wednesday. But instead of explaining Facebook’s harms, she provided guidance on how to fix the problems the platform has created. 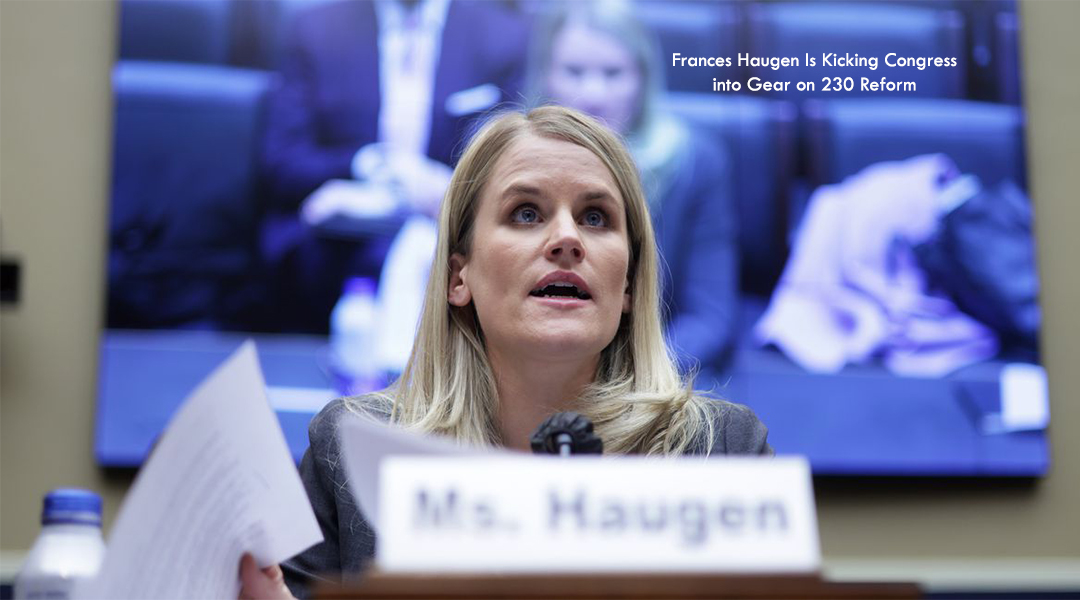 Specifically, House lawmakers on the Energy and Commerce Committee requested Haugen’s input on a slew of recently introduced measures to reform tech’s controversial legal liability shield under Section 230 of the Communications Decency Act.

According to the verge, both Republicans and Democrats have a stake in the game, but their deep divides over what kind of online content should stay up or down have stalled any chance of pushing reforms.

Frances Haugen Is Kicking Congress into Gear on 230 Reform

But House Democrats are more optimistic now than ever in their abilities to clamp down on hate speech and harmful content. In an interview on Wednesday, Rep. Tom Malinowski (D-NJ) said that Congress’ work to regulate tech was largely paused due to its work in passing President Joe Biden’s Build Back Better agenda.

“We had to deal with infrastructure,” Malinowski said. “Today’s hearing is a signal that the 230 reform will likely be on our agenda through next year.”

House Democrats Are More Optimistic Now Than Ever

Rep. Mike Doyle (D-PA) echoed Malinowski’s enthusiasm in an interview with The Washington Post on Wednesday.

“The fact that this has been discussed and debated and [we’ve] had hearings ad nauseam and Congress has not acted is not acceptable to me,” Doyle said. “So my goal at this hearing is to start moving legislation forward.”

These bills, like Malinowski’s Protecting Americans from Dangerous Algorithms Act, provide more targeted changes to the law than many of the proposals that come before them mainly in their focus on algorithmic amplification of harmful content.

“There’s a growing realization that the algorithms are the problem,” Malinowski told The Verge in an interview on Wednesday.

“Through their recommendation algorithms, the social media companies have created a perfect machine for driving people to political extremes and even to violence.”

Committee Leaders Betting On a Bipartisan Outrage Over Algorithms

Committee leaders, including Doyle and Rep. Frank Pallone (D-NJ), are betting on a bipartisan outrage over algorithms to help them pass moderation reform over the next few months.

In his opening remarks, Doyle pointed out that Rep. Cathy McMorris Rodgers (WA), the top Republican on the subcommittee, issued a discussion draft that would remove platform immunity for amplification earlier this year.

Without Republican support, any 230 reforms would likely be dead in the water when passed off to the Senate, and its razor-thin Democratic majority, for approval.

“There’s a bipartisan desire to reform the courts’ interpretation of Section 230,” Doyle said on Wednesday. “And the American public wants to see us get things done.”

Still, some civil rights activists fear that any changes to Section 230, including those targeting algorithmic amplification, could cause more harm than good.

“We don’t want to chill amplification that is benign or beneficial, but also doesn’t want to prevent accountability when platforms’ actions cause harm even in the absence of personalized recommendations, or outside of carve-outs for important subjects like civil rights,” Matt Wood, Free Press Action vice president, and general counsel said at Wednesday’s hearing.

“Congress Needs To Do Its Due Diligence and Legislate Responsibly

Other activists fear Congress may be moving too fast and without properly considering the consequences for vulnerable communities when they last changed the law.

After Trump signed SESTA / FOSTA in 2018, sex workers have been forced off websites like Backpage.com where they screened clients, despite the bill’s stated purpose to combat sex trafficking.

“It’s irresponsible and unconscionable for lawmakers to rush toward further changes to Section 230 while actively ignoring human rights experts and the communities that were most impacted by the last major change to Section 230,” said Evan Greer, director of Fight for the Future.

“The last misguided legislation that changed Section 230 got people killed. Congress needs to do its due diligence and legislate responsibly. Lives are at stake.”

The committee plans to hold a second hearing next week as it ramps up its efforts to pass meaningful reforms.