Exciting Places In The World Worth Visiting Right Now

Exciting Places In The World Worth Visiting Right Now. It is not a fact to be ashamed of that there are some places we should have visited that we haven’t, even if we have been traveling around the globe for a very long time. 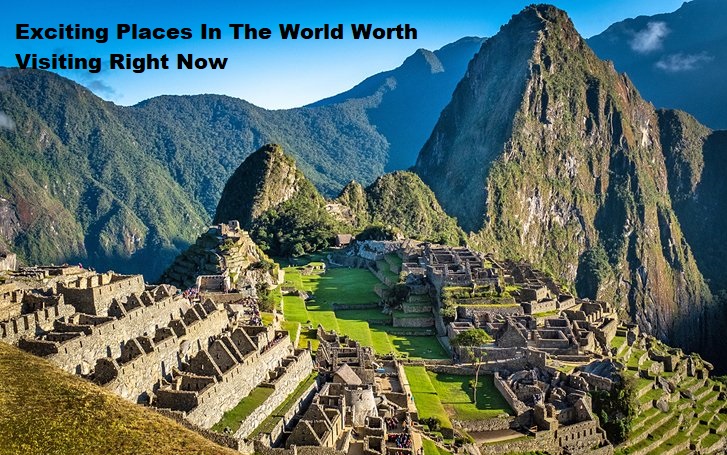 The places given in this article are fantastic places to visit indeed, and we are going to be proud to have gone there or to have read about them at least.

When you finally visit The Grand Canyon, you’ll join over 5 million people who visit every year, making it one of the world’s premier tourist attractions. It’s arguably the most jaw-dropping sight you’re ever likely to experience.

The Grand Canyon is a star of a gazillion Hollywood movies and more than enough GoPro footage of hiking, biking, rafting, and climbing, the Grand Canyon has been carved over centuries by the Colorado River in Arizona. Don’t worry if you’ve not seen it yet – you’ve got some time because it’s taken over 2 billion years to make it what it is today.

Amsterdam is a very beautiful place to visit, especially because there are so many things you can do there, allowing you to get up to all sorts of unadulterated mischief with your gang of mates without your parents being any the wiser.

It’s one of the most liberal cities in the world, and also one of the greenest. Literally and figuratively speaking.

This place is the general favorite of the non-traveler, the fabulous remains of the Inca city in Peru It’s one of the world’s most popular tourist destinations, and for good reason. Trekking in the jungle Inca trail will be one of the most memorable activities you can do there, the Manchu Picchu looks even more spectacular than it looks in photographs.

Get your skates on to see it, because new measures are being implemented to curb the huge crowds. It’s too much of a cash-cow to close though.

This is the capital of Thailand and it has been raking in tourists since the 1960’s when it became a major transport hub for Southeast Asia. Since Thai infrastructure has continued to grow rapidly millions of people flock here every year to enjoy a very wonderful holiday

In Bangkok, there’s enough to keep you entertained for days, months, and even years.

London is one of the most visited places in the planet, But London is a global city steeped in history and entwined in the ancestry of so many, has been one of the original strongholds of the old world. Thus, it attracts record numbers of visitors each year, keen to see the likes of the changing of the guard and Benedict Cumberbatch.

Although it’s technically not a place, you should really have seen this northern hemisphere phenomenon by now. The bright dancing lights of the aurora are actually collisions between electrically charged particles from the sun that enter the earth’s atmosphere, Best viewed from Scandinavia, Iceland, and parts of Scotland.

They are known as ‘Aurora Borealis in the north and ‘Aurora australis in the south. We’re pretty sure you could also get a good look at the Aurora Borealis if you went to the North Pole – although that’s considerably further down the pecking order when it comes to places you should already have been.

Across the pond, Alaska, Canada, and Greenland offer good views too, but its not quite the best if you’re south of the equator. You’ll just have to make do with the southern version.

Also known as the Big Apple. Times Square, The Empire State, Broadway, Central Park, The Statue of Liberty, and more. If you’ve never been to the city that never sleeps, it might certainly feel like you have, with all the scenes we see in the movies, you may not need to bother.

New York is a love-it-or-hate-it kind of place. If you love big, bustling, rowdy, crowdy, take-no-prisoner cities you’re in for a treat. If you don’t, maybe it’s best to book a holiday in a place like Mongolia.

Located in the center of the Mediterranean Sea in southern Europe. A place with a lot of attractions, cities, and sights. Venice alone could be the most visited city in the world.

Go and see it before it’s reclaimed by the sea, or totally ruined by the amount of foot traffic. And if you’ve never been to Rome, you should be ashamed of yourselves.

This is a list of places I suggest you should visit. If you haven’t been to any of these places, you shouldn’t be called a tourist yet because these are some of the most visited places on the planet.