Elizabeth Holmes Claims Theranos’ Former President Abused Her. She cried on the stand as she recounted being raped at Stanford. It was part of the reason she dropped out of college, she testified. “I decided I was going to build a life by building this company,” she said on the witness stand today. 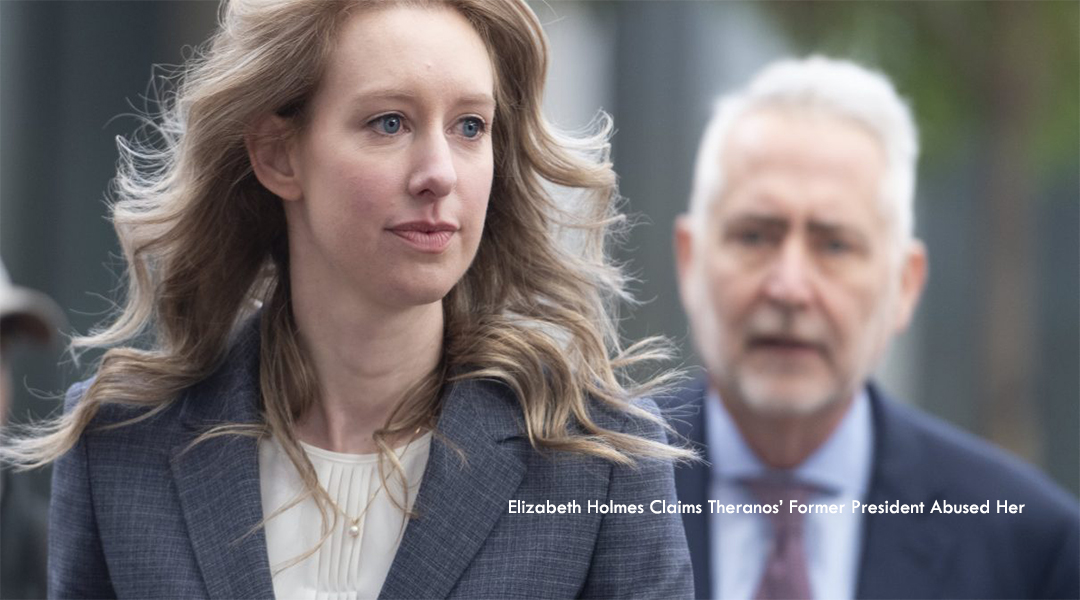 When she started dating Sunny Balwani, her co-defendant who is being tried separately, “he said I was safe now that I had met him.” Then, she said, he abused and raped her.

According to the verge, Holmes, the former CEO of Theranos, is standing trial for 11 counts of wire fraud and conspiracy to commit wire fraud. Recordings of Holmes lying to investors and journalists have been played to the courtroom.

Since the opening statements, we knew she was going to try to shift blame especially onto Balwani, the company’s former president. Balwani’s lawyer has previously contested Holmes’ allegations of abuse.

A Monkey Trying To Fly a Spaceship

Witnesses earlier in the trial said that they saw Balwani defer to Holmes. They also said that in meetings where both were present, Holmes did most of the talking and ran the meetings.

James Mattis, a former Theranos board member, testified that Holmes was “in charge” of Theranos. Lisa Peterson, who worked on the DeVos investment in Theranos, said her team didn’t do comprehensive research on Theranos because they didn’t want to “upset Elizabeth.”

Holmes said today that Balwani controlled her behind the scenes: what she ate, how she dressed, and how she talked. She claimed he texted her while they were in meetings together to criticize her.

A document was seen in what Holmes identified as Balwani’s handwriting that she said contained instructions for her. He told her she was like “a monkey trying to fly a spaceship.”

Balwani met Holmes when she was 18. He was 37. She understood he was successful, that he’d worked with Bill Gates at Microsoft. When she went to Stanford, they kept in touch via email. In March 2004, Holmes dropped out of school.

She said she spoke to Balwani about making a business out of a patent application she’d filed. She moved in with him in 2005.

Holmes didn’t put an exact date on the beginning of the alleged abuse. But Balwani “told me that I didn’t know what I was doing in business, that my convictions were wrong, that he was astonished at my mediocrity and if I followed my instincts I was going to fail,” she claimed.

He said that “who I was, was never going to be a person who would succeed in life or in business, so I needed to kill that person and become a new Elizabeth.”

Balwani Told Holmes How To Spend Her Time

If she wanted to be a successful entrepreneur, Balwani told her, then Holmes needed to spend all her time on the business, and only spend time with people who would make the business successful, she said.

Holmes’ lawyer moved into evidence a bizarre handwritten document. Holmes said she recognized the handwriting as Balwani’s. (It was distinctive, particularly around the capital letter “I.”)

The document contained instructions such as, “Every morning I will force myself out of bed and spend 30 minutes+ (never a minute less) to write what I want from my day.

I will only spend time on things that are most important to cash flow” and “I will never meet with anyone (direct report especially) for more than five minutes unless I have written down why my focus is on how they will serve the company more.” “He was talking about me,” Holmes said.

Then we saw a schedule Holmes had drawn up for herself on what appeared to be hotel stationery for a hotel in Singapore called Raffles. The first item on her schedule, at 4AM, was to “rise & thank God most things are not logical.” Then, from 4 to 4:15, she was to “wish for change.”

It also noted her lunch, tofu with tabbouleh, and “green drink.” Below the schedule were a series of notes to herself that Holmes said were Balwani’s precepts:

“I do everything I say, word for word” and “I show no excitement calm, direct, pointed.” When she was successful, Balwani took credit: “I have molded you,” he texted her.

The defense showed a document Holmes created on her iPhone, where she said she had written down what Balwani had been yelling at her: “I don’t enjoy being in a company that’s not going to win. I don’t have the faith. So angry at myself for coming. So angry spent [sic] 5 years of my life.

The biggest failure of my life. Regret coming. Stayed because I love you Fucking mediocre quality of this piece of shit company.”

Holmes said the abuse wasn’t just emotional. Balwani would “force me to have sex with him even when I didn’t want to because he wanted me to know he still loved me,” she said.

According to Holmes, she wrote another document on her iPhone after one of these incidents: “Don’t enjoy literally anything about it or who I am if I did it. Hurts so much. So, so much. Can’t focus on anything except why? Why hurt myself? Can’t even move let alone do sit-ups or actually sit up. Lying swollen. Literally.”

What had broken Balwani’s spell, Holmes testified, was a report from a lab inspection in 2015. “I had gone into that inspection thinking that we had one of the best labs in the world.”

She got the report in 2016, and it said that Theranos’ operations posed “immediate jeopardy to patient safety.” After that, to Balwani’s dismay, she hired lab directors that reported to her and got outside advisors.

Holmes said that Balwani left the company shortly after, in May 2016, and that she didn’t continue her personal relationship with him past that. While he was on a business trip in Thailand, she and her brother secretly moved her things out of Balwani’s house.

Balwani did not tell her what to tell investors, journalists, or anyone else about Theranos, she said. When her attorney, Kevin Downey, asked how Balwani had affected her work at Theranos, she replied, “I don’t know. He impacted everything about who I was and I don’t fully understand that.”

The objective of this testimony seems to be to introduce evidence about Holmes’s state of mind. For the wire fraud charges to stick, the government has to show that Holmes was knowingly lying.

But if she believed she was telling the truth or she was somehow rendered incompetent to judge what the truth was the prosecution’s case falls apart.

A Motive of Love

Holmes’ lawyers have tried to get sections of a prior deposition from Balwani admitted as evidence in this case, because they say his lawyers told them he would plead the Fifth.

The prosecution contested this and, as part of their argument, claimed that his statements from the deposition aren’t admissible because of “a motive of love.”

Attached to the prosecution’s motion were texts from Holmes in May 2016 in which she said to Balwani, “I adore you.” In June 2016, after Holmes said she’d sneakily moved out of their house, Balwani texted her, “I know what you are thinking and going thru. Control your thoughts and don’t let fear control you.

Breathe and in every hour be conscious of your breath and breath [sic] out fear.” Holmes replied, “I love this.” According to the government, this is evidence that their romantic relationship persisted after Balwani left Theranos.

Holmes will have to explain how those texts fit with the testimony she gave today. That testimony also differs from what she told the Securities and Exchange Commission in 2017.

She said that the relationship had “died” before Balwani left Theranos. She also said in 2017 that she was “the ultimate decision-maker for the company.”