Deaths Confirmed After the Tornado Hits Amazon Warehouse. An Amazon warehouse in Edwardsville, Illinois collapsed following a bout of severe weather and tornados that ripped across the Midwest and South on Friday night. 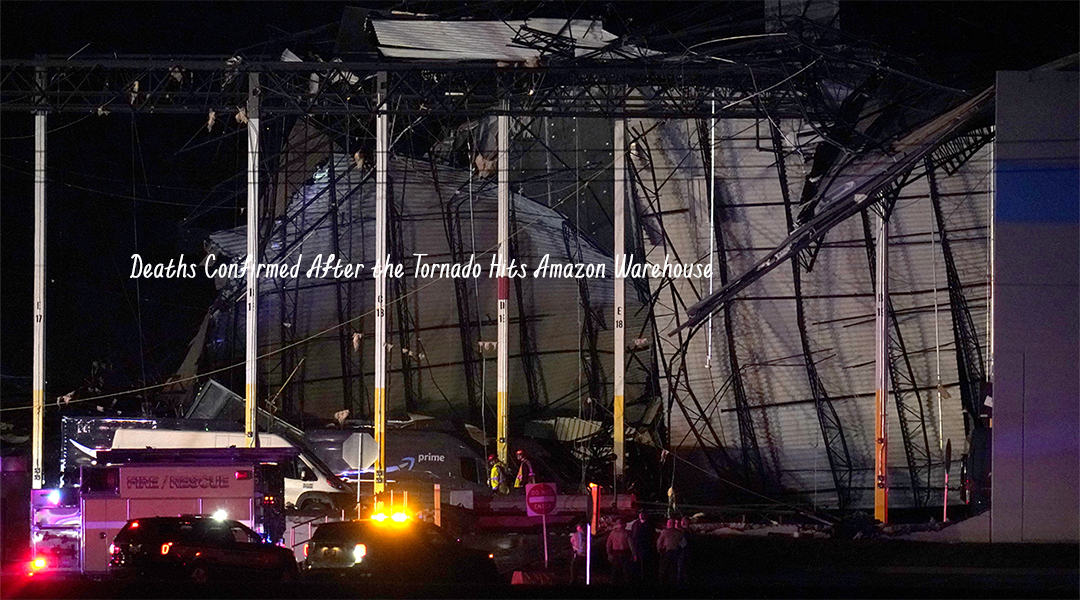 According to a report from Reuters, about six deaths have been confirmed, and a number of workers are still unaccounted for. This sounds terrible.

A post on Illinois’ Collinsville Emergency Management Agency’s Facebook page called the collapse a “mass casualty” incident. It later posted an update with a photo of the event’s aftermath, showing a large portion of the warehouse completely torn away by the storm. According to the tweet below;

During a press conference this morning, police chief Mike Fillback told reporters that authorities have had trouble finding out “how many people we actually had at that facility at the time because it’s not a set staff.”

Amazon management was at the scene to help create a list of staff members who are accounted for, however, Fillback notes that it’s still difficult to determine how many people remain trapped inside the collapsed building.

According to Reuters, at least 45 people reportedly made it out of the facility safely. While some were transported by bus to a safe area and reunited with family, others were able to leave the scene on their own (via NBC News).

It remains unclear how many people were originally in the building, but as NBC News notes, authorities estimate that 110 workers could’ve been inside at the time.

Illinois Wasn’t the Only State Affected By the Severe Storms

“The safety and well-being of our employees and partners is our top priority right now,” Amazon spokesperson Richard Rocha said in a statement to The Verge. “We’re assessing the situation and will share additional information when it’s available.”

Illinois wasn’t the only state affected by the severe storms. According to NBC News, 70 fatalities are expected in Kentucky, while one was killed after a possible tornado hit a nursing home in Arkansas.

President Joe Biden sent out a tweet Saturday morning, stating that the administration is “working with Governors to ensure they have what they need as they search for survivors and damage assessments continue.”

(2/2) All of Edwardsville should know that the Amazon team is committed to supporting them and will be by their side through this crisis. We extend our fullest gratitude to all the incredible first responders who have worked so tirelessly at the site.

Amazon founder Jeff Bezos responded to the incident on Saturday night via Twitter. “All of Edwardsville should know that the Amazon team is committed to supporting them and will be by their side through this crisis,” he wrote.

Bezos had been in Texas that morning for his spaceflight company’s rocket launch that brought six people to space, including former NFL star Michael Strahan.

“Requiring workers to work through such a major tornado warning event as this was inexcusable,” said Stuart Appelbaum, the president of the Retail, Wholesale, and Department Store Union.

“This is another outrageous example of the company putting profits over the health and safety of their workers, and we cannot stand for this.”