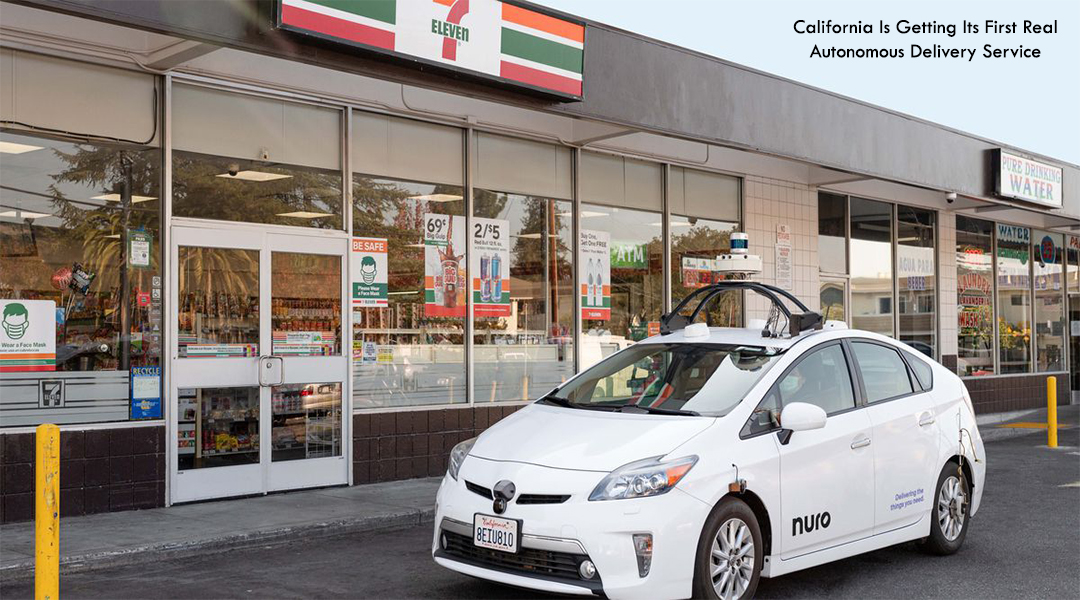 According to the verge, the company will deliver convenience store products to customers in its autonomous Toyota Prius vehicles, which will include a safety driver behind the wheel, before eventually shifting over to its fully driverless R2 delivery vehicles.

California Is Getting Its First Real Autonomous Delivery Service

The service will only be available to residents who live in proximity to the 7-Eleven store at 1905 Latham Street in Mountain View, from 8 AM–9 PM, seven days a week.

Customers can order items like pizza, chips, beverages, and household items through 7-Eleven’s “7NOW” delivery app, although age-restricted items, like alcohol and cigarettes, won’t be available.

Orders Will Be Delivered In 30 Minutes Or Less

Orders will be delivered in 30 minutes or less, and customers will have to leave their homes to retrieve the items from the delivery vehicle while it’s parked on the street. (The Nuro safety driver will not bring the items to the door, as the company is aiming to simulate a completely human-free delivery process.)

Nuro wouldn’t disclose the number of vehicles it will deploy as part of this early version of its service, nor would it say how soon it plans to shift deliveries to its R2 robots. “Nuro and 7-Eleven will make the joint decision to introduce R2 into the delivery fleet as soon as possible,” a spokesperson said.

Nuro, which is valued at $5 billion, was founded in 2016 by Dave Ferguson and Jiajun Zhu, two veterans of the Google self-driving car project that would go on to become Waymo.

Nuro is one of the few US companies to be operating fully driverless vehicles that is, vehicles without safety drivers behind the wheel on public roads today. Its R2 vehicle is about half as wide as a compact sedan, shorter than most cars, and there’s no room inside for human passengers or drivers.

The R2 is an updated version of Nuro’s original R1 prototype, with around 50 percent more capacity (which translates into about 18 more grocery bags). The company plans on producing a third-generation vehicle at its new facility in Nevada once it is fully operational in 2022.

The company is relatively unknown compared to its rivals in the autonomous vehicle space, mostly because of its focus on delivery and not ferrying human passengers in robotaxis.

Still, Nuro has made progress on the regulatory front, becoming the first company to receive a special exemption from certain federal safety requirements and recently getting the green light to charge money for its deliveries in California.

Nuro vehicles are already being used for grocery deliveries, pizza, and deliveries from CVS Pharmacy stores in Houston, Texas. In 2020, Nuro used its vehicles to transport medical supplies around two California stadiums that were converted into treatment facilities for patients with COVID-19.