Today, As Supply Shortages Continue the Prices of Chip is Being Raised. Potentially, this means that the increase in gadgets would be next. The prices of chips are being raised by TSMC (the biggest chipmaker in the world) as a supply shortage continues. Take note that TSMC is the company behind the processors used by Nvidia, Apple, Qualcomm, and even some Intel products. 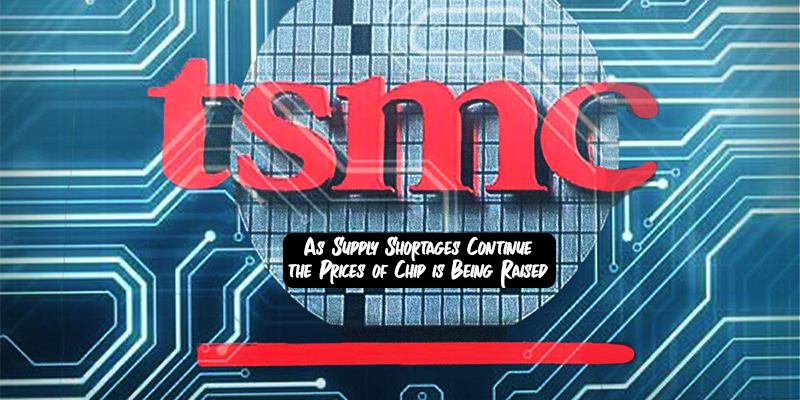 According to a new report from The Wall Street Journal, the company (TSMC) plans to raise the prices of its advanced chips by around ten (10) percent. The less advanced ones are going to be raised by about twenty (20) percent.

Currently (August 26, 2021), Semiconductor supply has become an increasingly important factor for major automotive and tech companies. This is a result of chips becoming hard to come by.

As Supply Shortages Continue the Prices of Chip is Being Raised

While there is a lot of factors that go into the prices of phones, game consoles, and laptops beyond the actual bill of materials, a ten (10) to twenty (20) percent increase in the processor and SOC costs may not necessarily match up to a similar jump in price for consumers.

Raising the prices however of two of the most important and expensive components in a device could mean that we are headed for a price increase in some of the world’s most popular devices. Take, for instance, two of the recently launched iPhone 12 is its Qualcomm modem and A14 SOC.

What is Apple Saying About This?

As much as we would love to know more from Apple’s view on the matter, the report on The Wall Street Journal did not specify whether Apple will be hit by the price increase or if it will choose to pass down the extra costs to customers.

Unfortunately, TSMC is literally quite the only supplier in the world that’s capable of making chips at the advanced level and volume that Apple needs to make its A-series and M-series chips for its iPads, iPhones, and Macs.

While this news may sound terrifying, the good news is that the raised prices may actually help alleviate some of the supply issues for TSMC by reducing some of the demand that’s been driving the scarcity in parts.

Additionally, it will help TSMC continue to raise the money it needs for its ambitious investments in expanding capacity.