With Among Us Fortnite’s Impostors mode looking a lot like Among Us, Among Us Developers are Not Happy with Fortnite. Yesterday (August 18, 2021) Epic games (the developers of Fortnite) launched a new game mode called Impostors. The issue here is that the new game mode copies the Among Us game mechanics.  Among Us was the multiplayer game that increased in popularity during the start of the pandemic. 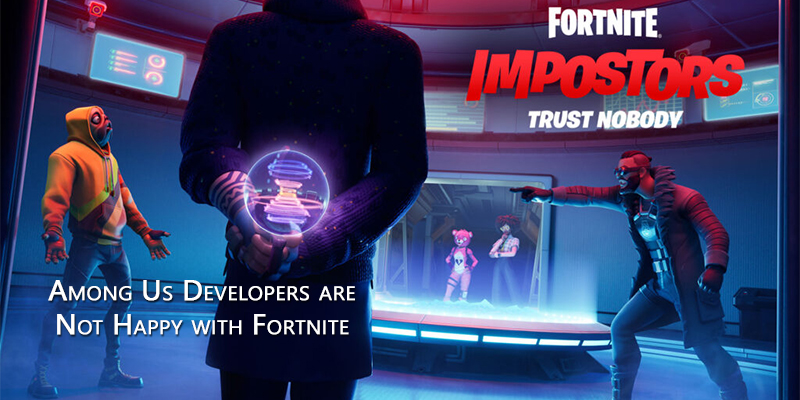 While the game was available for free on the Epic Games Store, Epic didn’t collaborate with Innersloth (the studio that created Among Us) for the new Fortnite game mode. Clearly, the developers behind the game (Among Us) are surprised and unhappy that Epic has copied their game so blatantly with social deduction gameplay and a very similar map.

Among Us Developers are Not Happy with Fortnite

According to an article on The Verge Innersloth community director (Victoria Tran) mentioned that it would have been really, really cool to collaborate. The similarities between the map that Fortnite uses and Among Us were also pointed out by Gary Porter (a developer for Among Us).  He also made a little bit of a joke on Twitter that it’s okay they flipped electrical and medbay and connected security to the cafeteria. Kotaku also spotted that a programmer at Innersloth (Adriel Wallick) also shared a comic about the theft of art online.

Fortnite Adds a New Game Mode that Basically Among Us

With the release of this new Among Us games mode style, Fortnite now boasts of its own version of one of the pandemic’s hottest games. This new game mode has a limited time. The game mode is being called Impostors. Divided into two competing factions, up to 10 people can play the Impostors game mode simultaneously. According to the gameplay, eight agents work to complete tasks around the new map before the two impostors can sabotage their efforts by eliminating agents and undoing their work.

Without a doubt, even though it is only a temporary mode in the game, Epic Impostors mode in Fortnite has obviously taken the Among Us team by surprise. Note that Epic’s decision to copy Among Us came just a few months after the company’s bitter legal battle with Apple. Also, there is the fact that Epic has faced years of legal complaints related to emotes that the company copied from children and independent artists without paying them.