Amazon reportedly working on an Alexa-powered soundbar and wall-mounted echo.  What do you think of amazons family of Alexa-powered devices? According to a new report from Bloomberg news, it’s a little bit of everything that has a great overview of the products the company is working on reportedly. 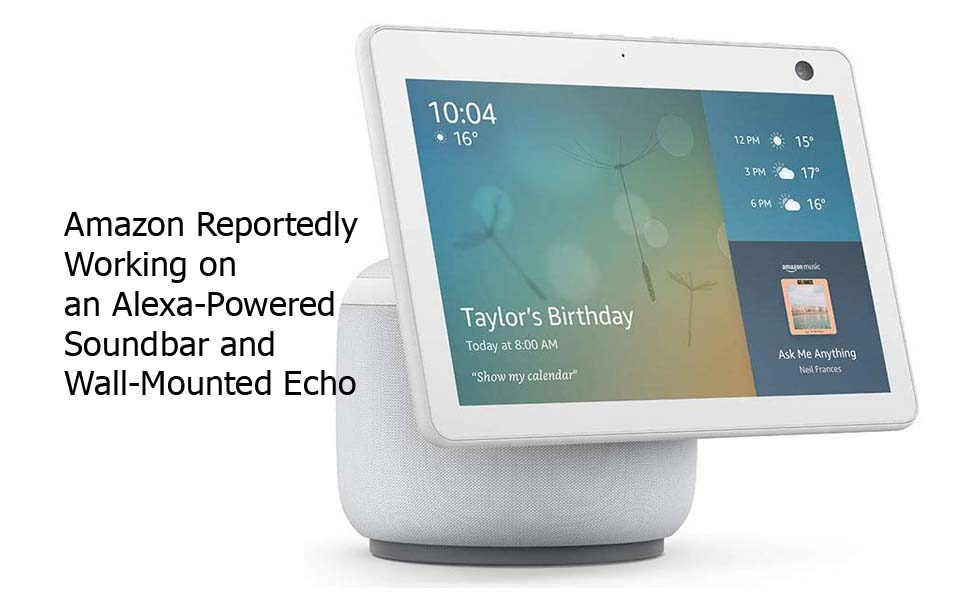 The eCommerce company as you know is one that is not shy away from trying out new things. The company is always planning on something, a host of things actually, and sees which one comes out fine. Based on that ideology the company even had to try out a huge screen echo device that can be mounted on walls. Yea, they did.

According to Bloomberg, here are some of the things Amazon has got on its bucket list;

After the launch of the display-equipped echo show line, amazon is now supersizing the screen roughly with a 15-inch display. This said device is designed in a way that it can either be mounted on walls or placed on a stand. The device would serve all the usual echo functions. It would also act as a control panel for home devices. The device is also reported to be kitchen friendly as it could be used for watching recipes on Netflix as you cook.

Amazon previously has been reported to be working on an Alexa-powered soundbar integrated with a camera. The device is designed to make video calls in the home easier than normal as with Facebook’s Portal devices.

Bloomberg says the updated echo auto “will have a new design and may be able to charge a user’s device with inductive technology.” The original echo auto wasn’t like by many as it was seen more like a better Bluetooth adapter option than being a navigation tool.

Bloomberg first reported that amazon was then working on a mobile echo device with a display that can follow users around the home. But as of now, it seems that the said device’s future is in shambles. Bloomberg says that “the robot has drawn concerns over its viability from staff.” insider noted similar issues with the device from a report earlier this year. A source said “people are very skeptical. We are worried that it could turn into another fire phone.”

Amazon has previously explored the possibility of building an Alexa-powered karaoke microphone. Codenamed Jackson, the device was planned to be released this year, but unfortunately, the team working on the product has been disbanded reports Bloomberg.

As you should know, these are just rumors. It, therefore, means that they could fail to make it out to the public, but looking at the whole thing from another point of view it seems plausible and given amazons approach to trying new products out, we may as well be surprised.